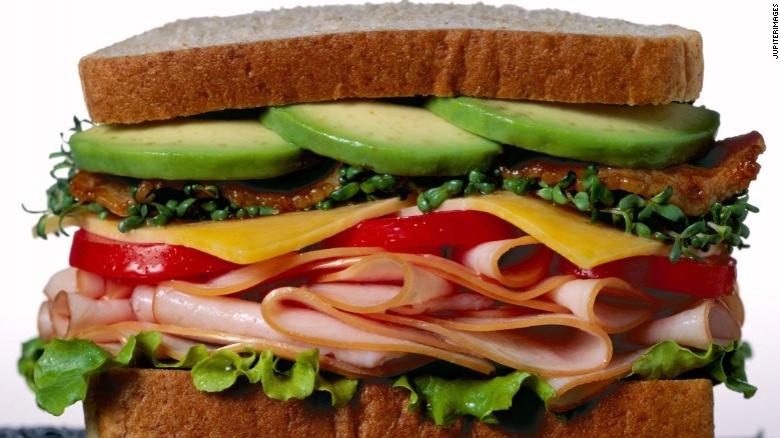 (CNN)White or wheat? Mayo or mustard? Hero or gyro?

However you slice it -- and there are a million ways -- almost everyone has a favorite sandwich.

The origins of the hands-on meal date back centuries, But it was popularized in 1700s England by John Montagu, the fourth Earl of Sandwich, who ordered beef between slices of bread so that he could eat while continuing to play cards.

Some 250 years later, the humble sandwich has grown to encompass infinite regional variations while serving as the perfect portable repast for our mobile lifestyles. In honor of Tuesday's National Sandwich Day, here's a closer look at the many flavors we can pack between pieces of baked goods.It seems obvious. Most of us would probably say a sandwich is meat and/or other ingredients between two slices of bread.

But in 2015, as menus increasingly show global influences, it's not so simple. Is a wrap a sandwich? What about a burrito? A gyro? Or a burger or a hot dog?

Last year The Atlantic took a stab at defining the sandwich as: 1) having two exterior pieces of bread or bread-like product, 2) mostly horizontal in structure, 3) portable and 4) containing more than just a condiment (no, ketchup alone is not a sandwich).

Still, the issue is a little confusing.

New York state taxes burritos as sandwiches. But Massachusetts feels differently: In 2006, a judge there settled a turf war between Panera Bread and Qdoba Mexican Grill by ruling that a burrito is not a sandwich. In the end, it came down to the difference between two slices of bread versus one tortilla.

For the record, The Atlantic says a burger is a sandwich. But a hot dog? No.Last year Datassential, a market research firm, surveyed Americans on what type of sandwich they ate most often. The winner: turkey, followed by ham and chicken. More exotic sandwiches, such as Reubens or paninis, were further down the list.The survey found that when ordering out, Americans favor more elaborate submarine or cheese steak sandwiches. When at home, though, we prefer simpler ones such as peanut butter and jelly or grilled cheese. In other words, if we have to make a sandwich ourselves, we can get a little lazy.

In 2012, the Travel Channel pitted acclaimed sandwiches from around the country against each other in a tournament-bracket format. The winner was a roast pork sandwich, topped with provolone and pork gravy, from Tommy DiNic's in Philadelphia.A submarine sandwich, served on a long roll, is pretty much the same all over. Unless you're in New York, where it's called a hero. Or in Philadelphia, where it's a hoagie. Or in Boston, where it's a grinder (or a "grindah").

Confused yet? Then there are many distinct regional sandwiches, from lobster rolls (Maine) to Cubans (Miami) to cheese steaks (Philly, duh) to poi boys (New Orleans) to loose-meat sandwiches (Iowa) to brisket (Texas) to BBQ Kalua pork (Hawaii) to the bacon, fried banana and peanut butter sandwiches that Elvis made famous in Memphis and Mississippi.

And in some ethnic quarters of the United States, you can get a shawarma (a Middle Eastern sandwich, usually grilled meat in a pita), a Spanish bocadillo (often cold cuts or sausage on rustic bread) or a bahn mi (a Vietnamese sandwich with meat and picked veggies on a baguette).The largest-ever sandwich, according to Guinness, was a corned-beef monstrosity made in 2005 by staffers at Wild Woody's Chill and Grill in Roseville, Michigan. It tipped the scales at a whopping 5,440 pounds, or more than 2 tons.

The longest sandwich ever was made in 2011 in Beirut, Lebanon, and measured more than 2,411 feet. (Its ingredients included chicken breast, lettuce, tomato and spices.) Four movable ovens were created especially to bake one long continuous piece of bread.

And the most expensive sandwich? Serendipity 3, a New York restaurant, serves a "Quintessential Grilled Cheese" on bread made with Dom Perignon champagne and edible gold flakes, plus white-truffle butter and rare Caciocavallo Podolico cheese. It comes served with South African lobster tomato bisque as a dipping sauce. At $214, it better be really good.