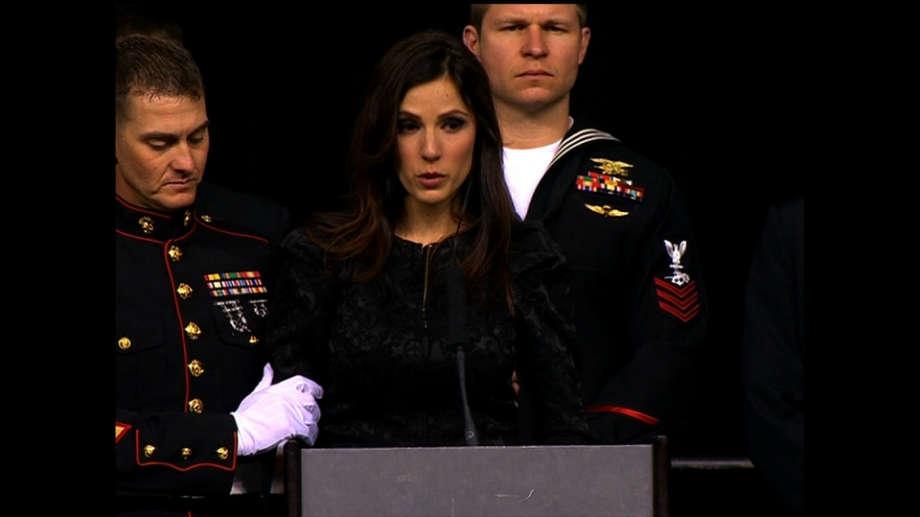 (CNN) -- For another weekend, moviegoers will be glued to their seats, watching the grit and turmoil of Chris Kyle, the real-life character portrayed in \"American Sniper.\"

But for Kyle's widow, Taya, the blockbuster hit is all too real.

Friday, Taya was left searching for words after the nonprofit organization AmericanSnipers.org awarded her family $62,000 from its successful rifle raffle.

The group auctioned off five rifles from its site. One of the rifles was a replica of the McMillan .338 Lapua sniper rifle that Kyle used in combat, which Taya signed.

In a YouTube video captured at the 2015 SHOT Show in Las Vegas, Nevada, Taya addresses an applauding crowd after learning about the money raised for her family.

\"I don't know what to say. It's been a bittersweet journey, obviously, and I do feel that Chris is with me,\" she says in the video.

Brian Sain, the co-founder of AmericanSnipers.org, says it was important for him and the organization to show their support for Kyle's family.

\"I think America needs heroes like Chris. He was a diehard American,\" Sain said in an interview with CNN.

Sain meet Kyle in 2009 and the two formed a friendship. They discussed working together to help raise money and gear for troops overseas through AmericanSnipers.org. In August, Sain organized a rifle raffle on the site as a way to continue that dream. The raffle ended on Thursday and the money that was raised was donated to Taya and her two children.

Coming from a law enforcement background himself, Sain says supporting Kyle's family is only natural. \"The whole community is a family. No one really understands what we do.\"

\"Chris would have done this for me.\"

Kyle was shot and killed February 2, 2013, at a gun range, alongside his friend Chad Littlefield. A Marine Corps veteran, Eddie Ray Routh, 25, faces murder charges in their deaths.