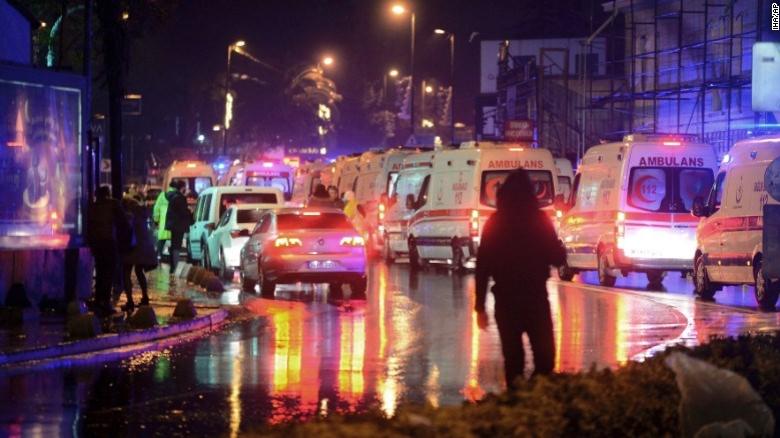 Istanbul (CNN) A manhunt is underway in Turkey for an unknown attacker who opened fire on New Year's revelers in an Istanbul nightclub.

At least 39 clubgoers were killed and nearly 70 were hospitalized after the suspect entered the Reina nightclub early Sunday and started shooting. An American was among the injured, but it was not clear if the person needed to be transported to a hospital.

"There is strong coordination and we will find him, no delay," he told reporters gathered outside an Istanbul hospital, where Yildirim had been visiting people injured in the attack.

Despite no group yet claiming responsibility, Turkish authorities quickly characterized the attack as the work of terrorists.

"We are face to face with a terror attack," Interior Minister Suleyman Soylu told reporters Sunday morning, adding, "the efforts to locate the terrorist are ongoing. Security forces have begun the necessary operations. God willing soon (the attacker) will be apprehended."

US officials also called it a terrorist attack, making it the first of 2017.

- The death toll from the Reina nightclub shooting stands at 39

- 69, including one American, are reported injured; "four of them are in critical condition -- one very critical," says Interior Minister
- No claim of responsibility has yet been made
- US, Turkish officials say incident is a terrorist attack
- Pope Francis condemns attack during Angelus address
- Turkey's PM believes attacker will be found soon
- US not aware of any Americans among fatalities

'At first we thought it was a fight'

Witnesses said an evening that was supposed to celebrate the new year became a bloodbath instead.

"We were having fun. At first we thought it was a fight, then there was a lot of gunfire," eyewitness Yunis Turk told CNN after police secured the nightclub in the Ortakoy neighborhood.

"After the gunfire everyone started to run toward the terrace. We ran as well. There was someone next to me who was shot and fell on the floor. We ran away and hid under the sofas."

Some people jumped into the Bosphorus strait, he said, a testament to the panic that engulfed the nightspot. Temperatures were near freezing in Istanbul and yet people were willing to leap into the frigid waters to escape.

"For 10 minutes there was gunfire and then for another five minutes they were throwing bombs, fired a bit more, then left," Turk recalled.

Turkish Deputy Prime Minister Numan Kurtulmus told CNN sister network CNN Turk that the attacker is a lone assailant and that the authorities "are trying hard" to identify and apprehend the person in order to investigate any ties to terror groups.

"I hope we will shortly identify the attacker and find who is behind it," he said.

Turkish President Recep Tayyip Erdogan released a statement via the semi-official Anadolu agency, offering his condolences to the families of the victims.

In the statement, he said those who attack the "serenity" of Turkey were trying to sow chaos but that the nation would not allow "this dirty game," and instead would unite and remain calm.

Pope Francis condemned the attack during his Angelus address in St. Peter's Square on Sunday. According to a statement released on behalf of the Vatican Press Office, the pontiff said the incident left him "deeply saddened."

"I express my closeness to the Turkish people," he said. "I pray for the many victims and the injured and for the whole nation in mourning, and I ask the Lord to support all people of good will who courageously roll up their sleeves to face the plague of terrorism and the bloody stain that envelops the world with a shadow of fear and bewilderment."

Russian President Vladimir Putin expressed condolences to Erdogan after the attack in Istanbul and said, "Our common duty is to respond decisively to the terrorist aggression," according to a statement released by the Kremlin.

Putin also said Russia was and would remain Turkey's ally in the fight against "this evil."

The White House announced that President Barack Obama's national security team had briefed him in Hawaii, where he is vacationing.

"The President expressed condolences for the innocent lives lost, directed his team to offer appropriate assistance to the Turkish authorities, as necessary, and keep him updated as warranted," White House spokesman Eric Schultz said.

"The members of the Security Council reaffirmed that terrorism in all its forms and manifestations constitutes one of the most serious threats to international peace and security," the statement said.

Security Council members "underlined the need to bring perpetrators, organizers, financiers and sponsors of these reprehensible acts of terrorism to justice," according to the statement.

So far, 39 of those killed have been identified -- 24 men and 15 women, said Ali Seker, a parliament member in Istanbul, according to Anadolu. Of those, 24 were foreign nationals and 11 were Turks, Seker said.

Among the dead are a policeman, a waiter and a private security employee, he told Anadolu.

Israel's Ministry of Foreign Affairs said one of the fatalities was a Palestinian citizen of Israel from the town of Tira. She was identified as Leanne Nasser, according to ministry spokesman Emmanuel Nahshon.

Two Jordanians were killed and four others injured, according to the Jordanian Foreign Ministry spokesman.

Tunisia's Foreign Ministry, in a statement posted on its Facebook page, said two Tunisian nationals died in the attack.

Two people from India were killed, according to the Twitter account of Indian Prime Minister of External Affairs Sushma Swaraj. He identified them as Kushi Shah and Abis Rizvi. Rizvi is the son of a former parliament member Rajya Sabha.

The Saudi consulate in Istanbul confirmed that a number of the victims were Saudis, but didn't say how many were injured or if any were killed.

State Department spokesman Michael Tran confirmed that an American had been injured but he said he could not provide any details on the person, including their age, sex or condition.

Around 1:15 a.m. Sunday, the gunman shot a police officer who was guarding the front gate at the Reina nightclub, killing him, Istanbul Governor Vasip Sahin said.

"He entered the club and attacked innocent people who were there to celebrate the new year. It was a cruel, coldblooded act," the governor said.

Witnesses in the club said they heard a loud noise, then a security officer told everyone to get out.

One victim said he didn't know how many attackers there were, but he saw one person and hid.

"I got shot in the (expletive) leg, man," he told journalists in English as he was taken into an ambulance. "These crazy people came in shooting everything."

A security camera captured the moment a gunman dressed in dark clothing dashed into the nightclub as bullets ricocheted in the street.

The club issued a statement on its Facebook page Sunday.

"This terrible incident is a terror attack against our citizens' peace, brotherhood, serenity, economy, tourism and against our nation. Our hearts bleed and the bullets are in our heart," the statement read. "All the people who died, the policemen, our tourist friends in the club, our waiters and staff are our sons."

Besiktas, on the European shore of the Bosphorus, is known for its expensive, upper-middle-class neighborhoods. The popular area had been under heavy police security for New Year's celebrations.

Ortakoy, where Reina is located, is a vibrant seaside neighborhood that caters to a wide range of people, from the uber-rich who party at clubs like Reina to students who buy stuffed baked potatoes from vendors along the Bosphorus.

Reina itself was one of the first clubs to open along the famous strait and remains a touchstone for Istanbul's exclusive nightlife. It boasts a classic Istanbul view.

Several analysts said the shooting looked like a jihadist-inspired attack.

"In terms of the soft-target aspects of this attack, it's a youthful place, a bar that's pretty well-known, in particular to expats. It's sort of the lively area of Istanbul, and especially on New Year's Eve night -- all of those have hallmarks of ISIS-inspired, if not directed, attacks to maximize casualties and get a lot of news around it," said Juliette Kayyem, CNN's national security analyst.

Turkey has endured a recent wave of terrorist attacks, leaving many people wary.

"This attack is, of course, a horrible development, but not shocking to many Turks who chose to stay inside this New Year's Eve," said Aykan Erdemir, former member of the Turkish Parliament.

"Turkey is known to host these big parties to celebrate New Year's, but this year most citizens were wary of Islamist attacks so they chose to celebrate it at home with their friends."

He said the attack seemed similar to what happened at the Bataclan, a Paris concert hall that was attacked by gunmen in 2015.

The United States condemned the attack.

"That such an atrocity could be perpetrated upon innocent revelers, many of whom were celebrating New Year's Eve, underscores the savagery of the attackers," National Security Council spokesman Ned Price said in a statement.

The US State Department said attacks like this one on its NATO ally "only reinforce our strong determination to work with the government of Turkey to counter the scourge of terrorism."

The US Embassy in Turkey warned citizens to avoid the area where the attack occurred.

Turkey faces numerous battles across different fronts. Not only have the Syrian conflict and refugee crisis spilled over into Turkey, but Turkey is also battling ISIS and Kurdish militants.

Both have staged attacks in Turkey, which is still reeling from a bloody and failed military coup in July.

ISIS is suspected in a June attack at Istanbul's Ataturk Airport that left 44 people dead and an explosion at an August wedding, not far from the border with Syria, that killed at least 54 people.

A pair of bombings in Istanbul killed 44 people and wounded 155 others December 10 in an attack by a breakaway group of the PKK. The two explosions occurred after a heavily attended soccer game at Besiktas Vodafone Arena.

On December 17, a car bomb exploded near a public bus, killing 13 soldiers in the central province of Kayseri. Three days later, a gunman assassinated Russia's ambassador to Turkey at an Ankara art gallery.