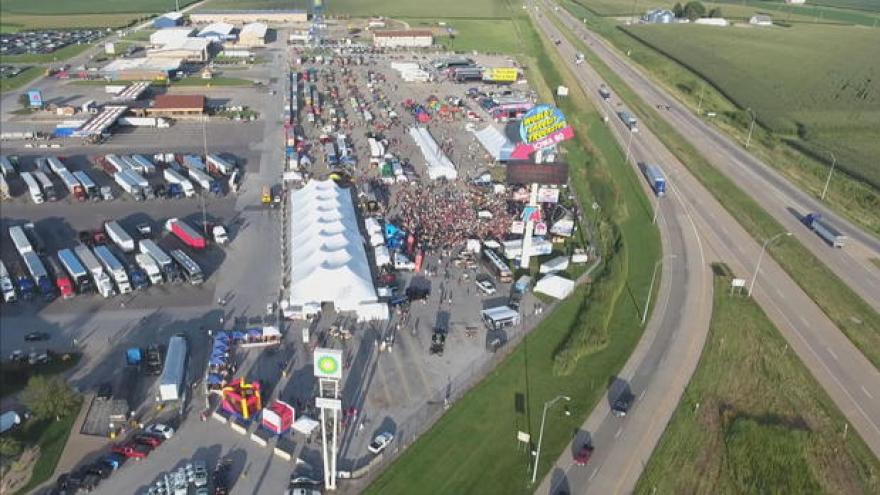 (CBS News) -- More than 70 percent of the goods we consume are carried on the nation's highways, but a new report says the industry needs to hire roughly 90,000 new truckers each year to keep up with demand.

"The American trucker carries our country," says recruiter Greg Koepel. And LinkedIn's managing editor Chip Cutter says, "Nothing we get isn't touched by a truck."

They say truckers drive the American economy. If that's the case, we could be in trouble. Fifty-thousand more drivers are needed by the end of 2017 and that number could more than triple in 10 years, reports CBS News correspondent Kris Van Cleave.

"When we're buying more stuff out there, whether that's cars, refrigerators, you name it, we're putting that in trucks, and that's gonna exacerbate the shortage that we have," said Bob Costello, the chief economist for American Trucking Associations, an industry trade group.

"Once we hit that 100,000 mark, I think that's where we start to see problems throughout the economy," Costello said.

Problems like product shortages, delivery delays and higher prices. Demographics are largely behind the shortfall, but the lifestyle, including extended periods away from home, can also be a major deterrent.

He was waiting for his rig to be repaired at Iowa 80, the world's largest truck stop, outside Davenport, Iowa. He's made life on the road work for his family and that gives him and drivers like Jennifer Gossmann a lot of bargaining power.

Iowa 80 doesn't typically allow recruiters at the truck stop because they fear it would turn into a bit of a frenzy. Instead, once a year they hold a Truckers Jamboree where recruiters are allowed to come in. This year, more than 44,000 people attended.

"The employment market for truck drivers is what I would call hyper-competitive and we feel it every day. We always say yesterday was our easiest day," said Roehl recruiter Greg Koepel at the Great American Trucking Show in Dallas.

His company hopes to attract new drivers, including millennials, by paying them to get a commercial driver's license and complete on-the-job training. Many drivers say it comes down to one thing.

"I think if they want to hire more drivers, they're gonna have to increase the pay," Gedenberg said.

Fleets are raising wages and offering incentives to attract drivers, but pressure to keep shipping costs down has also put a damper on compensation.

"If you look at the federal data, a truck driver in 2006 was actually making more than he or she would be making in 2016 if you factor in the cost of living. It's a couple hundred dollar difference, but still it shows that wages really have not meaningfully increased to address the shortage," said LinkedIn's Chip Cutter.

That data puts median driver pay just over $41,000. Still, many see trucking as the road to a better life -- the industry just needs to convince tens of thousands more to hit the road.