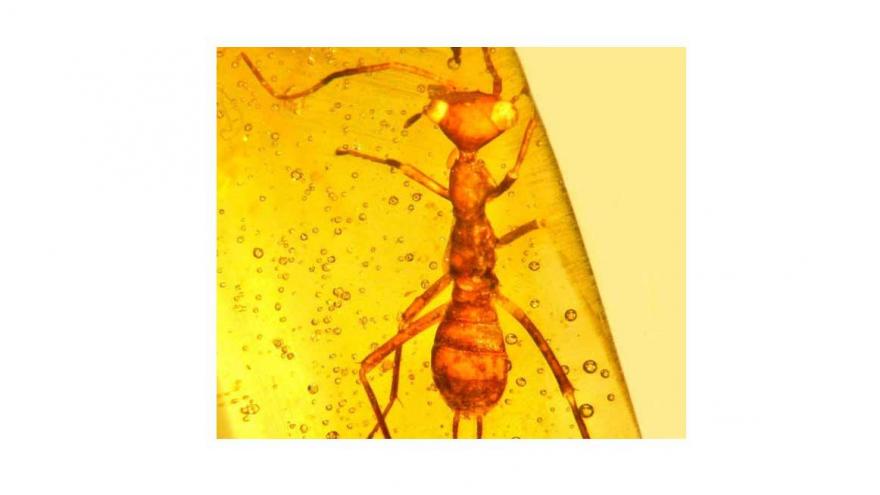 (CBS NEWS) The 100-million-year-old remains of an alien-looking female insect — complete with a triangular head and bulging eyes — have been discovered encased in a glob of hardened resin called amber.

The tiny creature, now called Aethiocarenus burmanicus, did not land on Earth via spaceship, but rather lived in what are now mines in Hukawng Valley in Myanmar, the researchers said. There, hiding out in the miniscule cracks in tree bark, the insect may have hunted for mites, worms or fungi, the researchers added. Nearby, dinosaurs would have lumbered by, the scientists who discovered these remains said.

In fact, the extinct “extraterrestrial” was so different from other insects that its discoverers have created an entirely new order, called Aethiocarenodea, for the creature. An order is a scientific classification for organisms that is broader than a genus and family. [See Photos of Battling Ants and Termites Trapped in Amber]

“This insect has a number of features that just don’t match those of any other insect species that I know,” study researcher George Poinar Jr., an emeritus professor of entomology at Oregon State University, said in a statement. “I had never really seen anything like it. It appears to be unique in the insect world, and after considerable discussion, we decided it had to take its place in a new order.”

This new order brings the number of known orders of insects up to 32, Poinar added in the statement.

“The strangest thing about this insect is that the head looked so much like the way aliens are often portrayed,” Poinar said. “With its long neck, big eyes and strange oblong head, I thought it resembled E.T. I even made a Halloween mask that resembled the head of this insect. But when I wore the mask when trick-or-treaters came by, it scared the little kids so much I took it off.”

Its “little green alien” appearance may have been an advantage: The insect’s triangular-shaped face was positioned with the triangle’s “vertex” or top point at the base of the neck. The positioning would have allowed the insect to turn its head to the side 180 degrees, literally looking behind itself, according to the researchers.

“Insects today can turn their heads 180 degrees, but up and down, not to the side like this,” Poinar said in a video statement.

When alive, the flat-bodied insect, just 0.2 inches long, had no wings, so instead of flying, it would have scampered on its long, slender legs along tree trunks or among lichens and mosses, Poinar said. The bug also had a pair of glands on its neck that may have secreted some chemical repellant to keep predators away, Poinar said.

The research is published in the April issue of the journal Cretaceous Research.