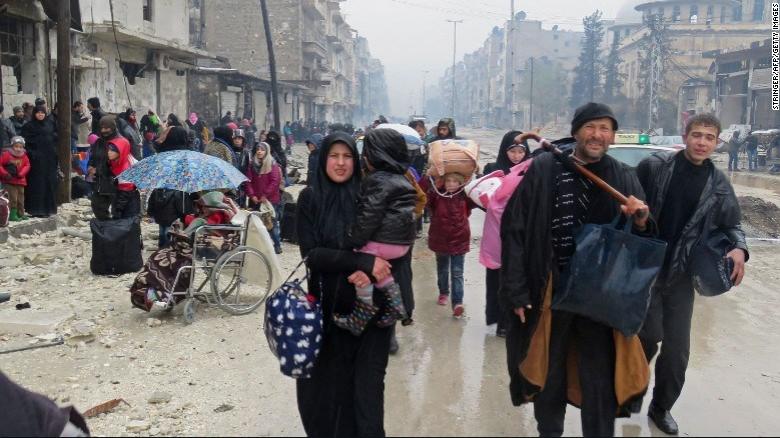 (CNN)A ceasefire brokered by Russia and Turkey for eastern Aleppo has been broken, activists on the ground and the Turkish Foreign Minister say, as a planned evacuation of civilians has also been delayed.

An activist with the Aleppo Media Center (AMC), Salah al-Ashkar, told CNN that heavy shelling had resumed on the remaining rebel-held areas Wednesday after the ceasefire was announced late Tuesday.

Activists claim that the shelling was coming from the regime, while Syrian state television reported deaths and injuries from rebel fire.

Families, rebels were earlier offered safe passage out of the city

CNN could not independently verify the claims but could hear shelling during conversations with activists inside the zone."The ceasefire agreement that started yesterday seems to have been violated. Tens of artillery are falling on besieged neighborhoods in Aleppo. There are wounded in the field hospitals, wounded from the shelling," the AMC activist al-Ashkar said in a video posted to social media.Turkey's Foreign Minister Mevlut Cavusoglu said that the Syrian regime and "some forces" were trying to break the ceasefire."We see (the) regime and some forces trying to break the ceasefire. There is Russia here. There is Iran. There are forces supported by Iran and of course regime. What we want is that nobody should try to throw the ball to others. There is an agreement here and it should be applied," he told the Turkish state-run news agency Anadolu.

The UN estimates around 50,000 civilians are still trapped inside the rebel-held zone. They were due to be evacuated at dawn but the Syrian Observatory for Human Rights (SOHR) said in a statement issued earlier today that the buses due to carry civilians out remained idle.The ceasefire that should see government troops, regime-aligned militia and rebel forces hold fire was announced late Tuesday as government forces were on the brink of taking all of Aleppo.

The first group of civilians scheduled to leave was supposed to consist of 70 injured people and family members -- a total of 150 people.

Rebel fighters were also offered safe passage out of the devastated city under a ceasefire deal brokered largely by Turkey.