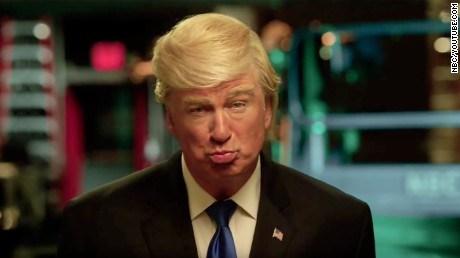 (CNN)The man who has been satirically portraying Donald Trump on "Saturday Night Live" weighed in Wednesday on Trump becoming the president-elect.

Alec Baldwin used his Twitter accounts to share his thoughts about the election. Late Tuesday, he retweeted two @ABFoundation tweets which said, "I was taught in college that Americans choose their President like they choose laundry soap, w a knee-jerk brand loyalty devoid of reason" and "One thing that is changed forever in this country is the meaning of the word "Christian" as it applies to politics."

On his @ABFoundation account he tweeted "The billionaire Republican businessman is close to winning the race and world markets are crashing. He's all yours, America. He's all yours."
The actor, who has quit social media before and has been known to be volatile online, has two Twitter accounts.
In 2012, Baldwin changed his main account to @ABFoundation with a description that reads "Alec Baldwin Foundation. Supporting the arts and artists, amateur and professional."
He then started an @AlecBaldwin account. Both accounts are verified.
Early Wednesday morning, Baldwin tweeted from that account "I think the thing to focus on now is our families. To love those that were put in our lives to care for. Also our respective health, work and faith. The American political system is broken. Walk away from it for a while. As Coriolanus says, 'There is a world elsewhere.'"
The "30 Rock" star has been vocal about not supporting Trump.
The Saturday before the election, "SNL" featured Baldwin as Trump and Kate McKinnon as Hillary Clinton.
The pair broke character to offer their sentiments.
"I'm sorry, Kate. I just hate yelling all this stuff at you like this," Baldwin said to McKinnon. "I just feel gross all the time."
But his personal loss could mean a professional gain for Baldwin if "SNL" brings him on full time to portray Trump during his presidency.
Share this article: