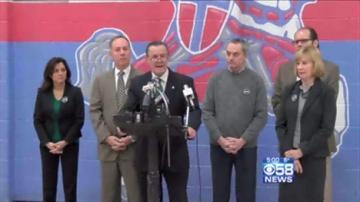 MILWAUKEE -- The numbers are sobering: 106 homicides in 2013.  That number made the murder rate jump by about 16 percent in Milwaukee.  But Alderman Bob Donovan (8th District) says he has a plan to help communities take back their city from criminals.

\"There is no limit to what this community can accomplish if we're all pulling in the same direction,\" Donovan said.

His \"Take Back Milwaukee\" plan calls for people to make community service pledges and clean up the streets.  It  also looks to expand the Shotspotter program, something that would require funding from Madison.

\"We want to find resources at the state level to ensure that technology is put to work, right here in this community to keep it safe,\" Speaker Vos (R - Burlington) said.

Shotspotter uses sensors across three square miles to identify gunfire and get police to the scene faster.  But it costs up to $50,000 per square mile and Republicans voted to cut a near half-million dollar state grant that helped the program.  But now, after lobbying from Milwaukee Police Chief Ed Flynn, Sen. Darling (R - River Hills) hopes to  get the state to kick in $175,000.

\"When you focus on crime and you have the community focused with you together to put  muscle into your effort, you can get a lot done,\" Darling said.

\"The few million necessary to bring those officers on, it's there,\" Donovan said.

\"We could input a lot of cops, we could give a lot of money, but if the actual community doesn't collaborate, make the phone calls, there's no use,\" Community Prosecution Unit Coordinator Patricia Ruiz said.

CBS-58 called Mayor Tom Barrett's office for comment on this plan, specifically if it's feasible to hire another 130 officers in 2015. We did not hear back from his office.

Some of Donovan's plans require private funding too.  Monday, the Kohn Law Firm pledged $50,000 to help.