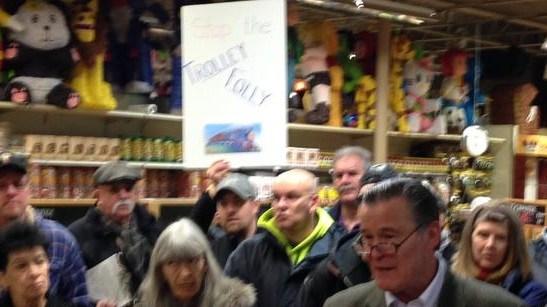 Milwaukee Alderman Bob Donovan is pushing people to sign petitions against the streetcar proposal.  He says time is running out before Tuesday's possible vote.  Donovan, a south side alderman, has been a long-time streetcar opponent.  He says it's a waste of money and there other ways to spend tax dollars.

He also says the federal money that will be used could be reallocated if need be. Donovan was joined by supporters Thursday at El Rey Supermarket on Milwaukee's south side.  He says it doesn't make sense for the city to move forward with a project that it can't afford down the road.

\"We can't pave our roads or fill the potholes because of lack of money,\" Alderman Bob Donovan said.  \"We can't even pay for the salt to salt our streets. Believe it or not, the city of Milwaukee, in the dead of winter, is rationing salt because of money.\"