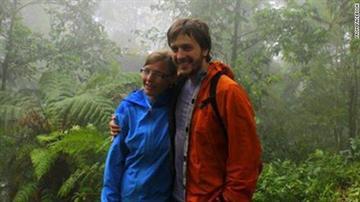 (CNN) -- You are told -- twice-- that your son has died, once by a state trooper and then again by a local police officer.

What do you do?

Express thanks, and perhaps frustration, that it's not true.

An Alaska family rode this emotional roller coaster earlier this week. And on Friday, Justin Priest -- the man whose parents believed had died -- said his family is \"very private,\" but hopes some good comes from getting the story out so no one else has to endure a similar nightmare ride.

\"We wanted to put a little pressure on the police department to make sure this sort of thing doesn't happen again,\" Priest said. \"And I think we achieved our goal.\"

It is true that Justin D. Priest was pronounced dead at the scene late Wednesday after the car he was driving slammed into a tree in Juneau, police announced in a news release. Two other passengers in his vehicle were injured, including one \"with apparent life-threatening injuries.\"

When something horrible like this happens, law enforcement officers have the unenviable job of notifying next of kin.

So, Juneau police reached out to the Alaska State Troopers, trying to get information on a Justin Priest from his parents in Palmer to determine if their son was in Juneau at the time of the accident.

\"Instead, ... the communication got mixed up,\" Juneau Police Chief Bryce Johnson said. \"We somehow communicated it wrong, and they thought that we wanted to tell the family that their son had died in the crash.\"

That's what troopers did, going to the Priest home in Palmer before dawn to relay the horrific news.

Then, Priest's father called Juneau police to verify it was his son who died in the accident. A Juneau officer said it was.

But a different Justin Priest had died, one who was 33, as police noted in their press release, and from Juneau.

The Justin Priest whose parents were contacted is 29, according to the Alaska Dispatch News, and from south Anchorage, about 570 miles away by air or boat and 850 miles by car from Juneau.

The parents of the 29-year-old thought their son was dead when they went to his house early Thursday morning.

They knocked on the door. And guess who answered, according to the Dispatch News?

Their son Justin, alive and well.

\"Justin?\" his father asked, the news website reported. \"It's Justin! Praise Jesus, we thought you were dead.\"

The mixup got back to Juneau later Thursday. Police there issued an updated press release, apologizing \"for our error\" and \"for any anguish our mistake has caused.\"

\"He told me what they went through, and I was left speechless,\" said a choked up Johnson. \"From my perspective, after hearing all that they did, I was talking to a great man. I was left with an immense amount of respect for him.\"

After this incident, Johnson said Juneau police would review its dispatch recordings, talk to officers about following procedures, and possibly change protocols if it makes sense.

What the police chief is not doing is shirking blame for what happened.

\"It was our case, our responsibility,\" Johnson said. \"...The family deserves for us to acknowledge that it was our mistake, and we are sorry.\"