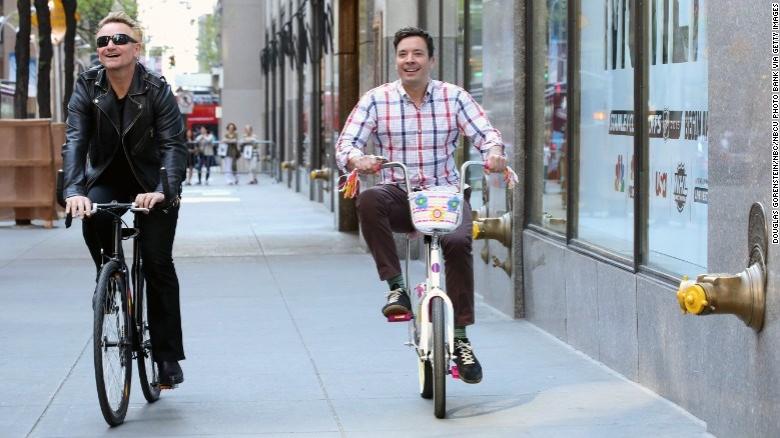 (CNN)If you've ever wanted to smoke weed with Snoop Dogg, here's your chance.

A "wellness break" with the rapper in Colorado -- where marijuana use is legal -- is one of more than a dozen in-person celebrity experiences being offered to people whodonate at least $10 this holiday season to Red, an organization that raises money to fight AIDS.

Over the next six weeks, donors can also bid on a chance to be complimented by George Clooney, to toss a football with star quarterback Tom Brady, to join Meryl Streep on the red carpet or to ride bikes with U2's Bono in Central Park, where the singer took a famous tumble last year.

"Join me for a bike ride, and really live on the edge," Bono says in a video plugging the campaign. "We'll ride, we'll laugh, we'll snap a few selfies ... and I'll tell you what it's like to suffer a facial fracture involving the orbit of your eye and having your elbow redone in titanium."

The campaign launched today, World AIDS Day, and you can enter by donating through January 21. Proceeds benefit the Global Fund to fight AIDS. Every dollar raised will be matched, up to $20 million, by the Bill & Melinda Gates Foundation.

It basically works like an online raffle: Each dollar you pledge gives you 10 chances to win the Bono bike ride or whichever celebrity experience you desire (all include flights and hotel). Donate $100, for example, and 1,000 entries bearing your name will be placed in the pool for that prize.

In other words, if you really, really want to party with Snoop, it's probably going to cost you.