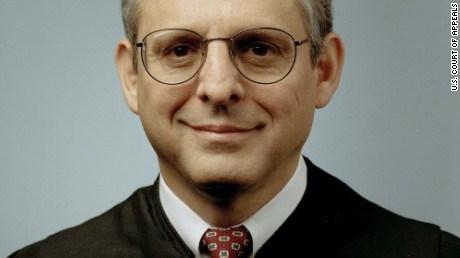 Washington (CNN)Following President Barack Obama's nomination of Merrick Garland to fill the open seat on the Supreme Court, a new CNN/ORC poll finds two-thirds of Americans want the Senate to hold confirmation hearings on his candidacy, and a majority of Americans say the Senate should ultimately vote to confirm him.

According to the survey, 52% say Garland ought to be confirmed, 33% that the Senate should not vote in favor of his nomination. Another 15% are unsure. That's about on par with public support for Obama's previous two Supreme Court nominees, Elena Kagan and Sonia Sotomayor, as well as other current justices on whose nominations we have polling, including Samuel Alito, Ruth Bader Ginsburg and Clarence Thomas. Chief Justice John Roberts is the only one to enter the confirmation process with significantly greater public support: 59% said the Senate should vote in favor of his nomination.Most Democrats (80%) and a plurality of independents say Garland should be approved (48% vote in favor, 37% against), but Republicans lean against it: 26% say the Senate should vote to confirm, 54% against.

Assessing Garland himself, 45% say they have a positive impression of him so far, 34% are neutral, 14% negative. Just 13% say they feel he is not qualified to serve on the Supreme Court, around a quarter say he is among the most qualified candidates out there. A majority, 56%, say that as a Supreme Court justice, he would be "about right" ideologically, more than said so about any other recent nominee. Just 25% say they think he would be too liberal as a justice.

Regardless of whether Garland's nomination succeeds, the Supreme Court at the end of Obama's time in office will likely remain majority male and majority white. Still, 58% in the survey said Obama has done enough with his three appointments to improve diversity on the court, 35% that he has not done enough.

Turning to process, most Republicans disagree with the position taken by Senate Majority Leader Mitch McConnell, who says the Senate will not hold hearings on Garland's confirmation. Among Republicans, 55% say the Senate should hold hearings on Obama's choice, as do 67% of Democrats and 68% of independents. The 64% overall who say there should be hearings is about the same as the 66% who said so in February before Obama named his choice to fill the vacancy.

Most Americans, 57%, say the choice for the next justice should rest with Obama and not with the next president, and a similar majority, 58%, say that senators who believe the seat should be filled by the next president would not be justified in voting against Garland for that reason. These views are sharply divided by party, however, with 85% of Democrats saying Obama should make the appointment, while just 26% of Republicans agree. Most Republicans (57%) say a vote against Garland because a Senator believes the next president should fill the seat is justified, while three-quarters of Democrats (76%) say it is not justified.

Most side with Obama on the Supreme Court nomination, and he fares better than Congress or the GOP leadership there on several other measures tested in the poll.

Congressional approval stands near its all-time low in CNN polling, with just 15% approving. That's down 6 points since last February, and just a few points above the 10% low point hit in September 2013 just ahead of a partial government shutdown. Another finding from the poll, released earlier this week, found the Republican Party's favorability also at its lowest point since that shutdown.

Obama's approval rating, meanwhile, stands at its highest point since May 2013, and the public expresses broader confidence in him to handle top issues than the Republican leadership in Congress.

Majorities of Americans say they have at least some confidence in Obama on dealing with the economy, handling foreign affairs, appointing the best people to office and providing real leadership for the country. Those figures are all down since December 2008, about a month before Obama took office, but they are well above the public's reviews for the Republican leaders in Congress on the same measure. A majority express confidence in those leaders on handling foreign affairs, but most say they have no real confidence in Republican leaders on the economy, providing real leadership for the country or on their constitutional role of providing advice and consent on presidential appointments.

The CNN/ORC poll was conducted by telephone March 17-20 among a random national sample of 1,001 adults. Results for the full sample have a margin of sampling error of plus or minus 3 percentage points. The margin is larger for subgroups.