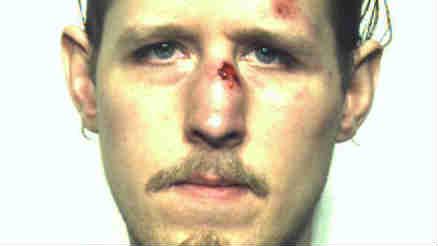 Terrified residents breathed a sigh of relief Friday after police arrested Eric Frein following a long manhunt in northeastern Pennsylvania -- and then held him at the same barracks where he allegedly ambushed state troopers last month.

Authorities spent nearly seven weeks hunting for Frein, 31, who is accused of killing one state trooper and wounding another outside the police barracks.

Shortly after authorities found him at an abandoned airport Thursday, they shackled him with handcuffs belonging to Cpl. Bryon Dickson, the state trooper he allegedly fatally shot on September 12.

The fugitive was then taken away in the slain officer's car.

Spotted after weeks on the run

The self-styled survivalist evaded capture in a vast wooded area of northeastern Pennsylvania that officials said he knew extremely well.

But his luck ran out Thursday evening.

After countless hours of searching, a team of heavily armed federal marshals spotted him at the Birchwood-Pocono Airpark near Tannersville.

Officials had feared the lengthy manhunt could have culminated in a violent showdown with Frein, who they said had been carrying around a sniper rifle and a handgun during his weeks on the run.

But when the marshals found him in an open field away from the airport hangar, he was unarmed, authorities said.

\"He was definitely taken by surprise,\" Noonan said.

Frein obeyed the marshals' order to get down on his hands and knees, and acknowledged his identity.

After weeks as a fugitive, Frein is now sitting in a cell in the Pennsylvania State Police barracks in Blooming Grove, the place where he allegedly ambushed Dickson and Trooper Alex T. Douglass.

Douglass, who was wounded, is getting better every day, authorities said.

\"The families of Cpl. Dickson and Trooper Douglass, and the Pennsylvania State Police have suffered an unimaginable harm of unspeakable proportion,\" he said.

Frein has already been charged with committing multiple crimes, including first-degree murder, homicide of a law enforcement officer, attempted murder and possession of weapons of mass destruction, Tonkin said.

Pennsylvania Gov. Tom Corbett told a news conference that he wanted to assure the officers' families that \"justice will be served.\"

Officials declined to disclose what comments Frein might have made following his arrest. His preliminary arraignment is scheduled for Friday morning.

'A real trial for the community'

The capture of Frein, who was on the FBI's list of its 10 Most Wanted fugitives, brings relief to residents of northeastern Pennsylvania -- and to the thousands of law enforcement officials involved in the search.

The hunt for him turned life upside down for people inside the search area. Before his arrest, helicopters buzzed overhead, and police seemed to be everywhere.

\"We're so proud of our Pennsylvania State Police and their hard work,\" Angela Ey, a resident of the borough of Hawley, told CNN affiliate WNEP-TV. \"There have been many, many sleepless nights. We give our whole life to them right now.\"

Noonan, the state police commissioner, acknowledged that recent weeks have been tough for people in the surrounding area, where the manhunt caused some school closures.

\"I know that this has been a real trial for the community,\" he said.

He praised officers from an array of law enforcement agencies and states involved in the search.

\"It's a hot, tiring, dangerous job,\" Noonan said, stressing the huge area of woodland that had to be covered.

Before Frein's capture, the weeks-long search -- which cost at least several million dollars -- yielded a mishmash of purported personal effects.

Police have said they found an empty pack of Serbian cigarettes. Frein claims to have fought with Serbians in Africa and has studied Russian and Serbian languages, according to the FBI.

A law enforcement official told CNN that knives were recovered from his hiding place, and that authorities are searching the area for more weapons. Noonan said he couldn't disclose what was found in the abandoned airport hangar.

Frein was in good physical condition when he was captured, apart from a cut on his nose that he had before the marshals found him, according to Noonan.

The fugitive looked \"healthier than I would have expected,\" he said.

Authorities have not discussed a possible motive for the crime, but said Frein has talked and written about hating law enforcement.

A review of his computer hard drive shows that he had planned an attack for years, authorities said.

\"Eric Frein had a mission that was to attack law enforcement,\" Noonan said. \"If he got out of those woods, we were very concerned that he would then kill other law enforcement. And if not them, civilians. That's why we had to keep the pressure on.\"

There was no indication that anyone was helping the fugitive, he said. Frein was \"quite well-prepared\" and had \"stashed various items for the situation,\" he added.

At one point, Frein was reportedly spotted in a wooded area in the town of Swiftwater, 8 miles southeast of the Canadensis area, where his family has a home.

\"It's kind of scary -- a little bit nerve-wracking -- because we live so close to it,\" said Marissa Labarre, who rode the bus to school with Frein when they were children.

She remembered him as quiet but not \"weird,\" and definitely not the type of person you'd expect to kill a police officer.

\"You hear of stuff like this, but you never know the person, or it's like hours from you. You know, it's on the news, but it's not ever close to home. So it's a little bit scary,\" Labarre said last week.

Officials said they were unsure how long he had been hiding at the airport.

\"We have just been basically sweeping every square inch of this wooded area that we could,\" Noonan said. \"But it's acres and acres. And the problem is once you clear an area, he can come back in.\"