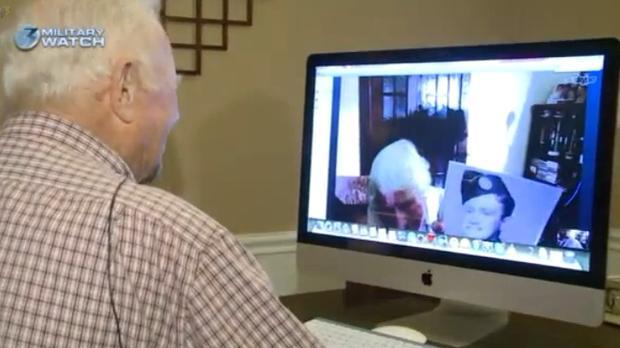 VIRGINIA BEACH, Va. -- A World War II veteran will travel to Australia to reunite with his wartime girlfriend after more than 70 years apart.

Norwood Thomas, 93, of Virginia Beach will travel to Adelaide, Australia, next month to reunite with 88-year-old Joyce Morris, The Virginian-Pilot reported.

Thomas told Morris that he would love to see her again in person when the two recently spoke via Skype. During their two-hour video reunion, the two recalled their time together when they met in England, a few months before he parachuted into Normandy with the 101st Airborne Division.

"The only problem is that I can't take you in my arms and give you a squeeze," Thomas said on Skype at the time.

After the war, Thomas returned to the United States. He sent letters to Morris asking her to come to America, but she declined, CBS affiliate WTKR reports.

"So I went on and later met and married another woman, a good woman, who helped my mixed up head get straight," Thomas said.

Thomas told WTKR he had a wonderful life with his wife before she died. It wasn't until after her death that he began thinking about Morris and a future with her. It was only a thought, until a few months ago, when Thomas' son, Steven, received an email from a man in Australia, who happened to be Morris' son, Robert.

WTKR reports that it turns out Morris had been thinking similar thoughts. She asked her son to do some research to see if Thomas was still alive and willing to talk after more than half a century. He did.

Morris has since lost much or her vision and currently resides in Australia. Thomas has also health problems and lives on a fixed income in Virginia Beach.

After learning about the couple's love story, Barbara McDonald, who served in the Navy for six years, wanted to do something to help, reported WTKR who spoke to her and Thomas back in November.

"We are all veterans and we should help each other out. It's just the way that it is," said McDonald.

McDonald took to the internet and created a GoFundMe page for Thomas and his son to travel across the world to Australia so that he and Morris can see each other in person, instead of through a computer screen, WTKR reported.

"To be able to see her after all these years, I am looking forward to that," said Thomas.

After their story went public two months ago, more than 300 people made donations online to help the two rekindle their romance. Others mailed checks directly to Thomas' house. About $7,500 has been donated thus far, according to the newspaper, which also reports that Air New Zealand has made arrangements to send Thomas and his caretaker son, Steve, to Australia free of charge.

Thomas said he was stunned by the generosity.

"I'm numb," he said. "I have no idea what my emotions are going to be once we meet face to face."

Thomas and Morris are expected to spend Valentine's Day together.