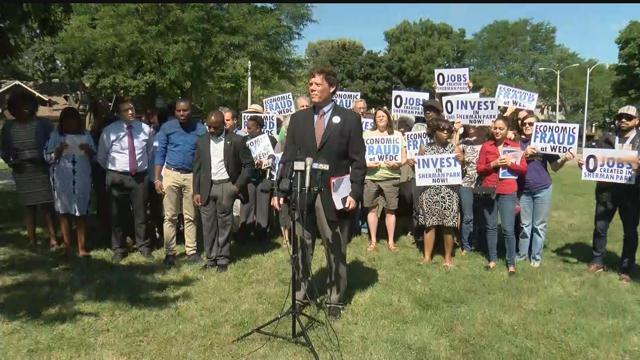 Citizen Action of Wisconsin held a news conference in the Sherman Park neighborhood in Milwaukee calling for the creation of more jobs.

Robert Kraig, Executive Director of Citizen Action of Wisconsin, said that the Wisconsin Economical Development Corporation (WEDC) is making false claims that it created 483 jobs in the Sherman Park neighborhood.

“WEDC, which is supposed to be creating opportunity for everyone in Wisconsin has done nothing about the job crisis and the lack of good jobs here in Sherman Park and the greater area,” Kraig said.

WEDC’s impact map on its website is inaccurate, according to Kraig.

Citizen’s Action was accompanied by state representatives, advocates and community leaders. They said that what happened in Sherman Park on August 13th relates to the lack of hope and lack of opportunity.

The group wants strategies and a plan of action to fix the job problem.

The contention by Citizen Action of Wisconsin is false and misleading, and is an attempt by the group to generate headlines based on a cursory review of WEDC’s online economic development impact map.

WEDC is fully committed to seeing the city of Milwaukee succeed economically and has committed more than $250 million to the city since 2011, and has never “claimed” to have created a specific number of jobs in the Sherman Park neighborhood, as Citizen Action falsely contends.

WEDC’s online impact map uses standard Geographic Information System (GIS) technology to visually represent the physical address of award recipients. When the physical address data cannot be precisely plotted, such as when a PO Box is provided, the system generates an approximate location. That is what happened with the companies identified by Citizen Action.

The impact map is one of many ways in which WEDC provides detailed information about loans, tax credits, grants and other awards—such as the amount of the award, the number of jobs expected to be created from the award, and the value of capital investment associated with the award. In addition to the map, that information is available in a searchable database and downloadable spreadsheet on our website, in WEDC’s Annual Report on Economic Development, and in quarterly reports submitted to our Board of Directors.

WEDC will continue to modify and upgrade those tools as part of an ongoing effort to be as transparent and accountable as possible.

What cannot be overlooked is that WEDC, along with numerous Milwaukee-area partners, is taking a long-term, strategic approach to help create jobs, assist entrepreneurs in starting and growing their own businesses, revitalize distressed buildings and areas, and generate capital investment in those communities.