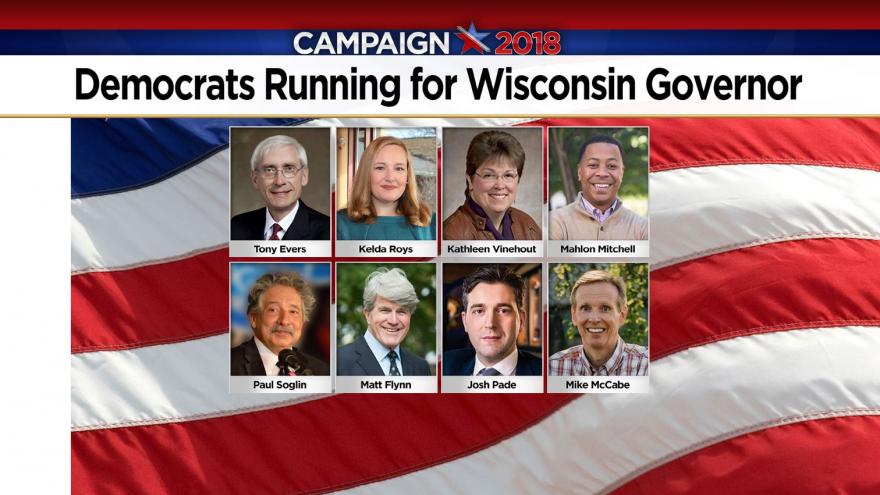 MADISON, Wis. (AP) — The much anticipated ad war among Democratic candidates for governor is finally underway, with candidates this week unveiling their first spots less than four weeks before the Aug. 14 primary.

The ads from Matt Flynn and Kelda Roys attempt to play to their strengths while also distinguishing themselves among the crowded field of eight candidates. Flynn and Roys were among the four candidates with the most money available to spend on ads, but they also fared poorly in Marquette University Law School's most recent poll, which was released Wednesday.

Tony Evers, the state superintendent, had a double-digit lead over the field, with about a third of respondents saying they were still undecided. Evers has yet to launch his first TV spot.

Roys had the most cash on hand as of July 1, followed by Flynn, state firefighters union leader Mahlon Mitchell and then Evers. Republican Gov. Scott Walker, who had $5.9 million in the bank, has been running a series of positive ads in recent weeks that focus on his record and not the Democratic opponents.

The Roys and Flynn ads offer a glimpse into what those campaigns see as winning messages to elevate their candidacies and overcome the advantage the Marquette poll showed for Evers.

Roys' focuses on protecting abortion rights, while also attacking President Donald Trump. The spot begins with images of Trump and his pick for the U.S. Supreme Court, Brett Kavanaugh, as Roys says, "Just when you think it can't get any worse, it does."

Roys incorrectly implies that it's illegal to get an abortion in Wisconsin. She says "in Wisconsin, abortion is still a crime."

The state does have an abortion ban that predates the Roe v. Wade Supreme Court decision that legalized abortion. However, the law can't be enforced because of that ruling. But abortion-rights supporters, like Roys, fear it would go into effect if the Supreme Court overturns Roe v. Wade.

Roys has promised that if she's elected governor, she would pardon anyone who would be charged with a crime under the state's abortion ban.

Roys' campaign spokesman, Brian Evans, said the ad will start running Friday in Milwaukee and Madison and will run in Green Bay next week. Evans said it's a six-figure ad buy.

Roys does not mention any of her Democratic challengers in her spot. But Flynn, in his ad that's also starting Friday in four markets, begins with an image of all eight Democratic candidates as he argues that he's the best choice because of his pledge to go to court to stop the Foxconn Technology Group project.

Flynn, a retired attorney and former director of the Wisconsin Democratic Party, derides the Foxconn project as "Scott Walker's corrupt $4.5 billion corporate welfare giveaway." Walker negotiated the deal that could lead the Taiwan-based company to invest $10 billion in the state and create 13,000 jobs.

However, Flynn and other critics argue the potential $4.5 billion in taxpayer incentives is too much. Foxconn plans to produce flat panels for a variety of electronic devices on its massive campus in Mount Pleasant, near the Illinois border south of Milwaukee.

Walker negotiated the deal that could lead to a $10 billion Foxconn investment with $4.5 billion in taxpayer incentives. He was at the White House on Thursday with Trump to highlight an executive order, also signed by Foxconn, touting American workers.

Flynn takes aim at Walker in his spot that ends with the narrator saying that Flynn is "beating Walker, stopping Foxconn."