Activists fear horses removed from California land will be slaughtered 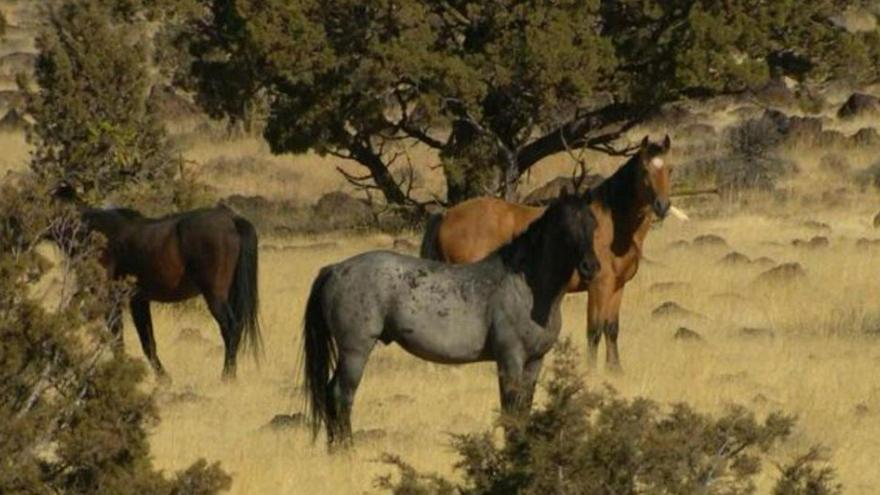 (CBS news) -- Hundreds of wild horses, long a feature of the American West, are being removed from a remote section of Northern California. As John Blackstone reports, the horses of Modoc National Forest have been caught up in the crossfire of competing interests.

"Removing horses from the land is going to make it a better situation for the horses that remain out there. For these horses, part of the reason they're calm standing behind us is they have food and water. They're not having to go searching for it," McAdams said.

Nearly 4,000 wild horses now live in Modoc, but according to Ken Sandusky of the U.S. Forest Service, there's only room for 200 to 400 horses to exist in "healthy balance with the land."

The land where they live is called the Devil's Garden, a landscape of volcanic rocks where the grass is often overgrazed by horses. Because of overgrazing, the land has been closed for use by cattle ranchers who are now suing the Forest Service. McAdams said even without the cattle on the land, degradation is still happening.

But the horses have ardent defenders far from the open range. The American Wild Horse Campaign has been holding fundraisers, fearing some horses will ultimately be slaughtered.

"In the average markets for horse meat at auction horses are going for hundreds of dollars apiece, so when the Forest Service says that they are going to sell them for a dollar a piece we know they are going for slaughter," said Ellie Price said of the American Wild Horse Campaign.

The Forest Service admits some older horses could be sold for as little as one dollar, and they have no way of knowing what happens to those animals. But even as the horses are being gathered, some enthusiastic buyers are looking for animals they'd love to adopt.

Jani, Denise and Kathryn have all adopted wild horses in the past.  Kathryn's was captured at Devils Garden last year.

"He's four years old now and he is a great horse. I mean I couldn't ask for a better horse," Kathryn said.

"The horses that are gathered get to go to homes where they are hopefully never in need of anything anymore," Jani said.

And Denise would rather see them go to a home than starve out on the range.

It's a controversy that won't end soon. Even if the Forest Service brings in a 1,000 horses this year as planned, another roundup will likely be needed next year.