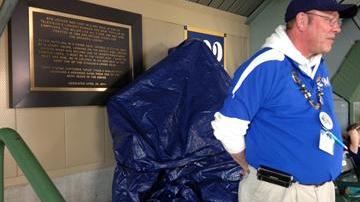 MILWAUKEE, WI - The new statue of iconic Brewers broadcaster Bob Uecker is so popular that access has to be limited. The statue of Uecker sitting in the last row of section 422 of Miller Park is covered up late in the game and afterward. The Brewers feel it's necessary to make sure fans and staff can safely leave the ball park. There is limited access during games to make sure that fans sitting near the statue can enjoy the contest. Some fans were disappointed after Sunday's game because they walked up there hoping to get a picture only to find it was covered up. At this point, the Brewers are only allowing pictures with the Uecker stature during pregame. Fans are asked to give a small voluntary donation to the Brewers Community Foundation and Make-a Wish. The Brewers will review the policies surrounding the Uecker statue as the season goes on.