ABC's of the ACT 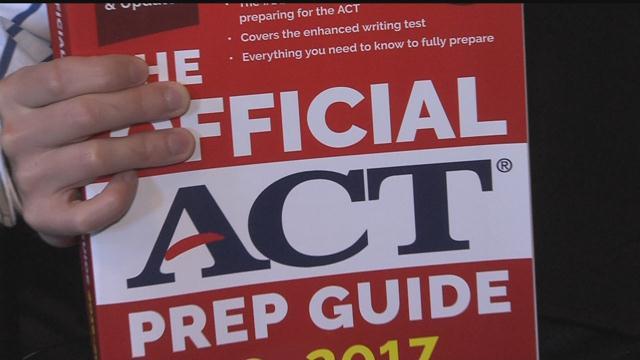 A new school year is about to start. While students may not be in the “back to school” mindset yet, it’s time to start thinking about an important test they’ll take outside of school.  The ACT and SAT are not the sole factors in determining college acceptance, but as one local tutor and author explains, it can keep students out. That’s why Kreigh Kern, says preparation is the key to success.

” You can get it done a lot faster if you do quality work as opposed to this massive quantity,” said Knerr, Director of the Knerr Learning Center.

He says the ideal amount of preparation time is 5-10 weeks. The school year gets busy, and Knerr says the hardest part for self preparers is discipline. If a tutor is not an option, Knerr suggests setting a schedule and using a study guide.

Studying over time helps students avoid testing fatigue, according to Knerr. The same theory applies to taking the practice test.

“If you make them take it over and over again, they’re exhausted, and they don’t care anymore. Even though they’re good kids and they want to try, they’re just done,” said Knerr.

Libraries and schools are free resources to students. Most libraries carry official ACT and SAT prep guides, and high schools have multiple copies of practice tests available to students.  If a student has access to a printer at home, those tests are also available online.

While summer is the ideal time to study, since there aren’t coursework conflicts, there are advantages to studying during the school year. Students can easily ask their teachers for help after class, with specific examples from practice tests.

In addition to taking the test, Knerr says students should build critical thinking skills by reading. Put together a reading list, and then have educated conversations about those books.

“Going back and forth and having those adult conversations are very similar to what the ACT and SAT are asking students to do on the reading sections,” said Knerr.

Preparation is no easy task, nor is the test itself. However, preparation can pay off in the long run. Knerr says every one point increase on the test can lead to an additional $1,000 in scholarship money, especially for merit based scholarships.

For more tips from Knerr, or to learn about his test prep smart phone apps, click here.