A viewer's guide to election night 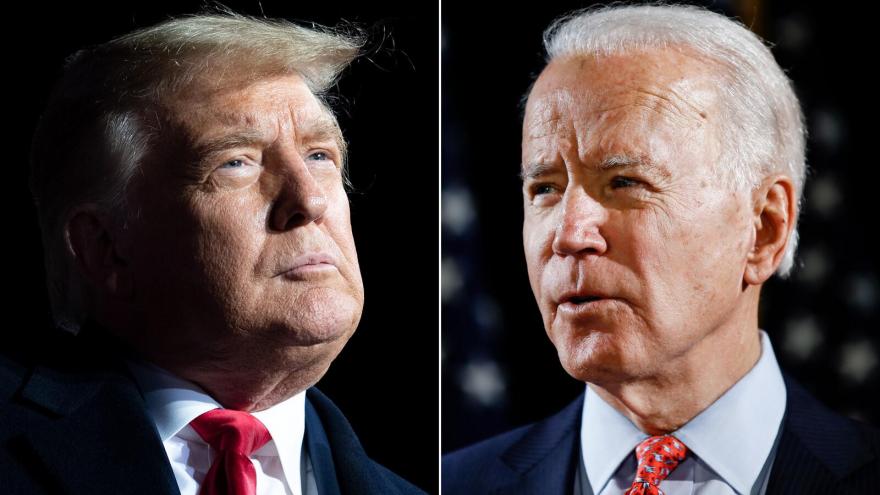 Fast-counting swing states in the Southeast will begin to report their results early. Battlegrounds in the upper Midwest and industrial Great Lakes, as well as states out West, will come online later. And counting votes could take some states several more days.

President Donald Trump and Democratic presidential nominee Joe Biden both have viable paths to victory that take them across the map: from the Southeastern states of Florida, Georgia and North Carolina, to the "Blue Wall" states that Trump toppled four years ago, and further west in Texas and Arizona.

Meanwhile, Republicans are seeking to maintain control of the Senate -- Democrats need a net gain of three seats if Biden is elected president and four seats if Trump wins.

And how voting is counted and reported in each state could create shifts for either candidate: The first batches of results in key states might not indicate those states' outcome as more votes are counted.

Here's a look at how election night could unfold:

Voting will still be open in all 50 states, but the first round of exit poll results will come at 5 p.m. ET. These exit polls won't predict who will win key states but will offer insight into who is voting and what is driving their vote. Those insights could help explain the election's outcome.

The first polls close at 6 p.m. in most of Indiana and Kentucky, two Republican strongholds. But the real suspense begins when polls close an hour later. Virginia -- long a swing state that has moved toward Democrats in recent years -- could be the first significant call of the night, with its 13 electoral votes expected to go for Biden. Georgia will be the first true battleground of the night, with 16 electoral votes.

READ: When polls will close in key states and when ballots will be counted

Most of Florida's polls close at 7 p.m. ET, but because its Panhandle region is in the Central time zone, some counties will remain open an hour later. The state has been processing ballots for weeks, so the first results reported are likely to be early votes that tend to favor Democrats. Biden's margins in South Florida -- Broward and Miami-Dade counties, in particular -- will be crucial to watch, with Democrats concerned his campaign has done too little to turn out Black and Latino voters. Still, polls have shown Biden besting Trump with older voters, which means he might be able to withstand a less-than-stellar showing in those counties in the battle for the state's 29 electoral votes.

Florida, Georgia, North Carolina and Ohio are crucial to the President's narrow path to victory. The Southeastern states are expected to count votes relatively quickly, offering an early window into Trump's chances of winning reelection.

Still, Democrats should not be too quick to get their hopes up: North Carolina and Ohio will both count early and absentee votes first, which are likely to be more favorable to Biden than the states' overall results, including ballots cast on Election Day.

Another state to watch where polls close at 7 p.m. is South Carolina. It's not a presidential battleground, but Democrat Jaime Harrison shattered all previous Senate fundraising records in what began as a long-shot bid to unseat Republican Sen. Lindsey Graham. A Harrison win would be a huge and unexpected boost to his party's hopes of winning control of the Senate.

Perhaps the most important battleground of all -- Pennsylvania -- closes its polls at 8 p.m. ET. It's the largest electoral vote prize of the "blue wall" states with 20 up for grabs, and polls have shown it could be the most competitive. Biden and Trump both barnstormed the state in the race's final days, underscoring its importance.

Plans for counting absentee ballots vary widely, and some counties won't release any of those results on election night, creating a scenario where the early results could be more favorable to Trump than the commonwealth's eventual outcome. Biden's hopes ride in part on a strong performance in the Philadelphia suburbs. Trump has sought to plant doubt in voters' minds about the sincerity of the former vice president's support for fracking in Western Pennsylvania, where Trump hopes to rack up huge margins among White working-class voters.

Texas, a huge electoral vote prize with 38 available, also begins counting votes at 8 p.m. ET, though the far-western portion of the state, including El Paso, is in the Mountain time zone and will start an hour later. A political-landscape shifting win in Texas would effectively cement a Biden victory. More votes were cast early in the state than were cast in the entirety of the 2016 election, so Democratic and Republican operatives will be picking through the results in Texas for a long time, determining whether the previously reliable Republican state now needs to be considered a presidential battleground.

Polls also close at 8 p.m. in Maine. The state is home to one of the nation's most closely watched Senate races, between Republican Sen. Susan Collins and Democratic challenger Sara Gideon, although with ranked choice voting, results in that race could take a while. The state also awards its electoral votes based on the outcome of individual congressional districts -- which means that, while Biden is favored to carry three electoral votes there, the 2nd District could be much closer. In a neck-and-neck presidential race, that single electoral vote could matter.

Portions of Michigan and Wisconsin -- part of the "blue wall" Biden is trying to rebuild -- are expected to be slower to report by-mail votes, which raises the possibility that the initial results could be more favorable for Trump than their ultimate outcomes.

Minnesota is the only one of the four states Trump lost in 2016. His campaign had hoped to foment a White suburban backlash to the racial injustice protests that followed Minneapolis police killing George Floyd over the summer -- but polls show such a backlash never materialized. Still, Trump and his campaign have made a push to flip the state red this year.

In Arizona, the increasingly diverse and suburban electorate has rapidly turned what was once a GOP stronghold into a swing state with 11 electoral votes up for grabs. Republican Sen. Martha McSally is a prime Democratic target, facing challenger Mark Kelly, a former astronaut and the husband of former Rep. Gabby Giffords. The state should process many of its results quickly, but a 2018 Senate contest between Democratic Sen. Kyrsten Sinema and McSally took weeks to finalize.

Nebraska's polls close at 9 p.m., and the state apportions its electoral votes by congressional district -- like Maine. While Trump is expected to win four of its electoral votes, the Omaha-based 2nd District is competitive and is also one of the suburban areas House Democrats are hoping to flip.

At 10 p.m. ET, polls close in two competitive states with six electoral votes each: Iowa and Nevada. If Biden wins Iowa, or if Trump wins Nevada, it would be a strong indicator that the race is going in their direction.

At 11 p.m., polls close in California, which means 55 electoral votes there will almost certainly be added to Biden's column. The rest of the Pacific coast, Democratic strongholds Oregon (7 electoral votes) and Washington (12), also close then and are expected to favor Biden. Idaho has four electoral votes Trump is likely to win.

The final contests to conclude are Hawaii, where polls close at midnight ET, and Alaska, at 1 a.m. ET on Wednesday.

One thing we can't predict: When one candidate crosses the 270 electoral vote threshold.

Both Trump and Biden are prepared to address the nation Tuesday night, though with so much uncertainty over when votes will be counted in competitive states, it's not clear whether and when one will be able to accurately claim victory and one will concede defeat.

Biden will be in his hometown of Wilmington, Delaware, on election night. His campaign has said he will address the nation at the Chase Center there along with his running mate, California Sen. Kamala Harris, and their spouses.

Trump, meanwhile, is likely to move his election night party to the East Room of the White House, because Washington's limits on the number of people who can gather indoors during the pandemic made holding an event at the Trump Hotel problematic.

However, Trump has repeatedly said he opposes states counting votes after election night, and is prepared to challenge those vote counts in court. Legally cast votes are always counted after election night; states typically do not certify their election results until weeks afterward. Winners and losers are declared on election nights based on network decision desks' analysis of partial results, which have no bearing on elections' official results.

CORRECTION: This story has been corrected to reflect that the last polls close at 9 p.m. ET in Nebraska, Colorado and Kansas.