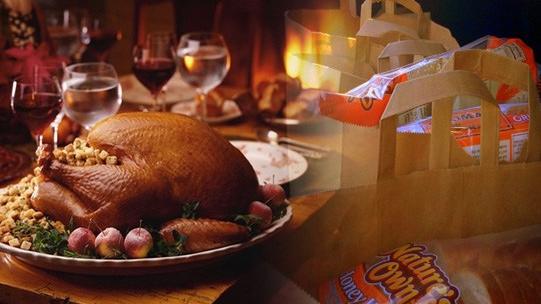 As many are sitting down with their families, some are on the job. Many police and firefighters will be on duty through the night, but the department in st. Francis has something to be thankful for.

Those on duty at the st. Francis fire department expected to treat today's holiday as any other day until a full Thanksgiving meal arrived at their door.

The Jeff Jankowski says the fire department was going to have steaks before Ron Larson and his wife stopped by. They brought more than the gift of thanks to the fire crew. The meal was big enough, they were able to share it with the police on duty.

Larson, a Vietnam Veteran had a reason for giving a little extra today.

"I know what it's like not to be thanked for a job. and these guys are never thought of except when you need them. and i want them to know they're thought of all the time," said Ron Larson.

With fire and police at the table, Ron and the crew shared the meal.

"It just feels great to give something like that and to see it's appreciated. I wish more people would do stuff like this," said Larson.

It wasn't just the turkey they were thankful for, but Ron.

"He's a man who is true to his heart, thankful to be alive thankful for things people have done for him. He was Vietnam Vet and did a lot of things for his country so we appreciate him just as much for the things he has done," said Jankowski.