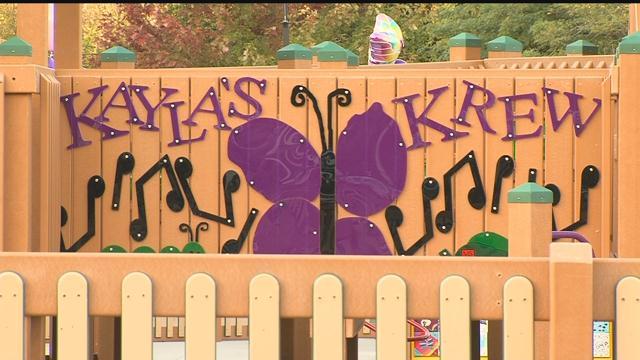 There was a scare in Franklin just hours before a special ceremony.

It happened just after midnight this morning, when neighbors called police about loud noises coming from the woods near Kayla’s playground.

Ultimately, officers found the "soda bottle bombs" they say were filled with materials to make them burst.

"Kayla's life although difficult had purpose,” Kayla’s mother Shelly Runte said. “I truly believe her purpose was to teach life lessons, compassion, patience, and acceptance, all without saying a word.  She rolled through her life with a wheelchair and she had friends who adored her. She planted the seed which inspired me and a few other friends to start Kayla's krew."

Kayla suffered from many physical challenges during her short life, and passed away cerebral palsy.

But the krew is honoring Kayla’s name with this playground for all children, including those with disabilities.

One feature that got everyone's attention is this swing set for children who are wheelchair bound.

It can only be turned with a key, and parents will be trained before putting their child on it.

"I was a big part of the whole operation,” organizer Andrea Minster said. “I don't know, it was like a dream come true as a big kid to be a little kid."

Around midnight, police found soda bottle bombs in the area, after someone reported a suspicious noise not far from Kayla’s playground.

"It certainly doesn't change the spirit of what we're doing, and it's a great thing for Franklin,” project volunteer James Hermann said.

Franklin's Mayor Steve Olson told CBS 58 a police presence will remain at Kayla's playground given everything that's happened. Also, security cameras have been installed to hopefully the tire a few bad apples from trying to do the wrong thing.