Update: One dead, 19 injured after car plows into protesters in Charlottesville 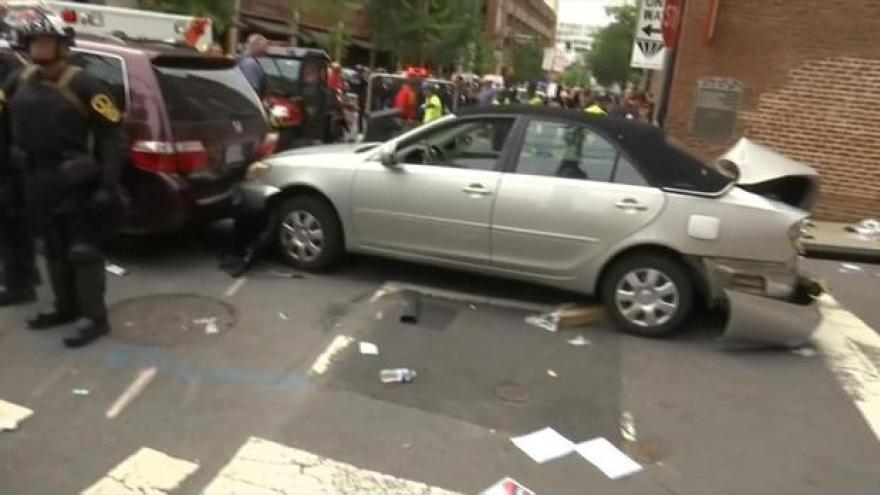 UPDATE: (AP) A hospital official says one person has died and 19 were injured after a car plowed into a group of protesters in Charlottesville.

The mayor of Charlottesville said via Twitter on Saturday that he is "heartbroken" to announce that a "life has been lost." He did not provide details.

Witnesses say a car plowed into a crowd of people who were protesting the rally, which was held by white nationalists who oppose the removal of a statue of Confederate Gen. Robert E. Lee by the city of Charlottesville.

A car struck protesters in Charlottesville, Virginia, after police dispersed a gathering of white nationalists on Saturday.

The injuries range from minor to life-threatening, authorities said.

A dozen medics are carting the injured back and forth on stretchers. The victims appear to be counter-protesters but could be residents, CBS News justice reporter Paula Reid reports.

White nationalists clashed with counter-protesters hours before the collision in downtown Charlottesville. Alt-right activists and white supremacists planned to protest the city's decision to remove a statue of Confederate General Robert E. Lee from the city's Emancipation Park.

Virginia Gov. Terry McAuliffe declared a state of emergency in the city to aid the state's response to violence in the area.

The City of Charlottesville also declared the assembly unlawful and officers in riot gear began to clear the area shortly after noon.

"It is now clear that public safety cannot be safeguarded without additional powers, and that the mostly out-of-state protesters have come to Virginia to endanger our citizens and property," McAuliffe said in a statement.

"I am disgusted by the hatred, bigotry and violence these protesters have brought to our state over the past 24 hours," McAuliffe said, adding that state troopers and the Virginia National Guard were providing support to local authorities.

Jason Kessler, the organizer behind the "Unite the Right" rally, told Erickson he plans to sue the city for violating a court order permitting the rally to be held in the park.

"Our First Amendment rights were violated today," Kessler said by phone. He said the city of Charlottesville and McAuliffe violated the court ruling because they "didn't like the outcome."

Some protesters who came for the "Unite the Right" rally were armed and dressed in military-like clothing, while others wore shirts with Nazi symbols and quotes from Adolf Hitler. Another read "diversity is just a genocidal scam."