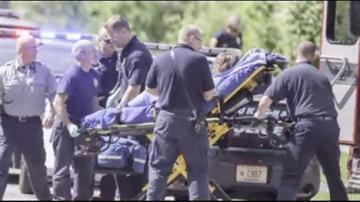 WAUKESHA-\"She says she's having trouble breathing.\" And so began the emergency call Saturday morning that revealed a sordid plot allegedly among middle school girls to kill a classmate.

The 911 call came from a bicyclist who happened to see the 12 year old victim lying on a trail near a dead end street in Waukesha.

\"She says she was stabbed multiple times,\" the caller relays to the dispatcher who asked him to repeat to be sure he heard him right.

\"She says she can take shallow breaths. She's alert.\"

The good Samaritan waited with the girl reported dried blood visible on her clothing, but he feared causing more injury if he moved her.

In muffled tones, as he hangs on the line with dispatch, you can hear the man speak with the wounded girl.

The caller continued to reason with his 12 year old.

He decided not to press on because he was worried that she needed to conserve her energy rather than speak of her attackers.

Officials say the girl sustained 19 stab wounds to major organs and at the time emergency crews rendered care she was a millimeter away from dying.