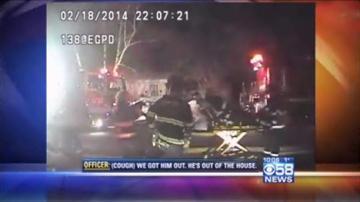 ELM GROVE -- It's a 911 one call one Elm Grove police officer won't forget.

On February 18th, Officer Preston Noble responded to a house fire in the 1800 block of Brojan Drive in Elm Grove.

When he arrived, he saw flames and heard a woman scream that her husband was trapped inside of the burning home.

Noble could be heard relaying that message to dispatch on 911 calls as he rushed inside.

\"About two feet was as far as I could go on my hands and knees from me opening the door to where the smoke and heat was starting to travel towards me,\" Noble recalled.

He searched the front of the home, then the garage, where he found the elderly man and got him out safely.

\"We got him--we got him out of the house,\" Noble said, with coughs between a few words.

Noble was treated at the hospital for smoke inhalation. But he's back on the job, and doing well.

No injuries were reported. The cause of the fire remains under investigation.