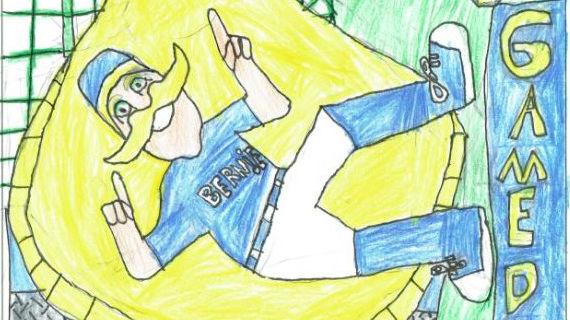 After receiving numerous creative submissions, the Brewers announced 9-year-old Brett Weckwerth of Green Bay, Wisconsin, as the winner of the “Call to the Pen” contest. Weckwerth’s original drawing of a sliding Bernie Brewer will be featured on the cover of the Brewers “Brewers GameDay,” the official game program of the team.

The cover will appear during the September 20-22 series against the Pittsburgh Pirates.

Weckwerth, a fourth grader at Heritage Elementary in De Pere, is an avid baseball fan. He plays catcher for De Pere baseball and was inspired to enter the contest by his love of the Brewers. He lives in Green Bay with his mom, Tiffany, dad, Matt, and two brothers, Luke and Jake.

As the winner, Weckwerth has won 500 copies of the program with his design on the cover, a meet and greet with Bernie Brewer and the Klement’s Racing Sausages, tickets to an upcoming game and a gift certificate to the Brewers Team Store by Majestic.

A month ago, the Brewers asked young fans to create hand-drawn designs to be featured on the cover of “Brewers GameDay” during the second to last home series of the 2016 season. All submitted designs were reviewed by an internal Brewers committee that selected the winner based on overall appearance, originality/creativity, style and quality of the submission.

All of the submissions may be viewed at Brewers.com/calltothepen.