8-Year-Old Shot and Killed After Car Accident in Houston 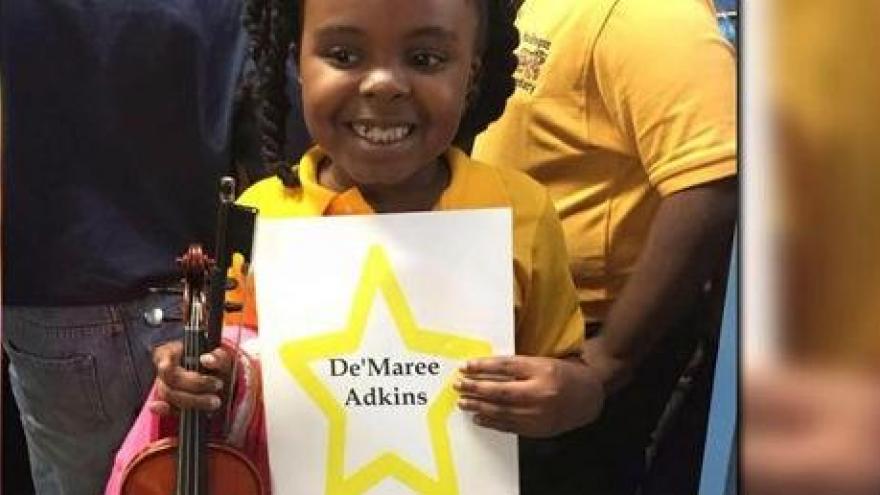 HOUSTON - (KHOU) An 8-year-old girl was shot and killed after being involved in a car accident in southwest Houston early Saturday morning, according to the Houston Police Department Homicide Division.

De'Maree Adkins was an honor roll student at Mac Gregor Elementary, as well as an aspiring violinist.

"I loved that little girl. She was my pride. My joy," said Toyia Jarmon, De'Maree's mother. "I can't imagine life without her. I really can't."

The girl described as "smart," "outgoing" and "beautiful" by her family was shot and killed just a mile from home.

De'Maree was asleep in the backseat of Jarmon's car around 1 a.m. Saturday when Jarmon said a white Pontiac crashed into her at the intersection of West Fuqua and Beltway 8.

"When I checked on her, she didn't even know what had happened because she was asleep. I said, 'Baby, you OK?' She said, 'Yeah, I'm OK. What happened?'" said Jarmon.

Within seconds, that changed, according to Jarmon. She said another car pulled up next to her and a woman inside opened fire, hitting De'Maree in the chest.

Houston Police aren't sure if there was a connection between the other two cars, such as whether they were chasing or racing each other. Officers said the drivers of both cars took off and, so far, have not been found.

Paramedics took De'Maree to Memorial Hermann, where she died.

"I'm never going to be able to wake her up in the morning for school. I can't comb her hair. I can't give her a kiss, no hug, no nothing. Because of you, whoever you are," said Jarmon.

Houston Police don't know yet who pulled the trigger, but Melvin Jarmon Sr., De'Maree's grandfather, hopes that person's conscience catches up with them soon.

"You were man or woman enough to pull that trigger," he said. "You need to man up, turn yourself in and take your punishment."

Police have described the vehicle that fled the scene as a dark, four-door sedan. They don't have any suspects in custody and the motive is unknown.

A GoFundMe account has been set up to help the family with funeral expenses. Anyone wishing to donate to the family can do so here.

Crime Stoppers is offering an award up to $5,000 for information that leads to an arrest and charges.