8 Taken to Hospital after Bus Rollover 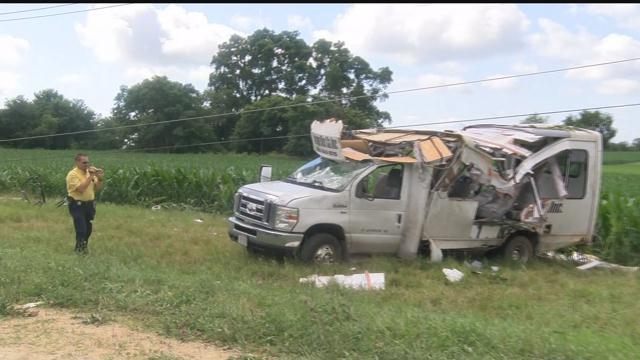 Multiple medical helicopters called to the scene this morning of a bus rollover crash in Jefferson County.

Highway 106 is still closed at this hour.

Investigators are still trying to figure out exactly what happened this morning.

Just by seeing the aftermath you can tell that this was a horrific crash.

The bus clearly split a power pole in half and rolling over into the ditch.

Both sides of the bus were ripped open you could see mangled seats inside.

There was also a wheelchair sitting in front of the bus.

The bus is owned by the Levine Bus Company in Fort Atkinson.

We spoke with them over the phone.

They tell us that seven people plus the driver were on board.

They were all taken to local hospitals but they did not know the extent of their injuries.

But they did say at this time there are no fatalities.

The bus company would not tell us where the bus was headed.

As far as the investigation it's unclear how long crews will be out here and how long this road will be closed.