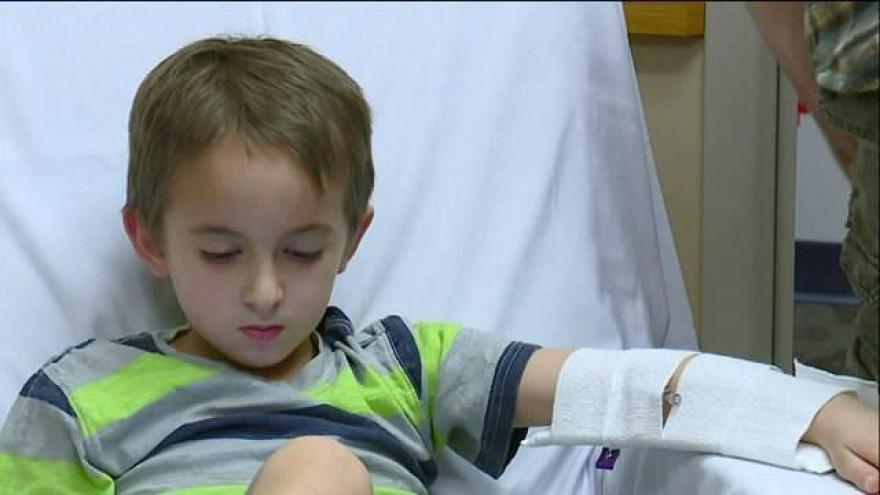 Akron, Ohio -- A local boy has become the first in Ohio to have hope of overcoming the crippling effects of muscular dystrophy thanks to a breakthrough drug some are calling a genuine miracle.

Wyatt Hubbard, 7, of Ravenna was diagnosed six months ago with Duchenne muscular dystrophy, described by his doctors as the most devastating form of the disease.

"It's still hard to hear and you can't really accept that it won't ever change; you can just watch it every day as it progresses and wait for things like this. This is the first thing offered," said Hubbard's father, Trevor Smith.

But a breakthrough medication just recently approved by the FDA and obtained by specialists at Akron Children's Hospital is giving Hubbard and his family a genuine hope that others have, until now, only been able to dream of.

"This therapy is something that the community of parents and providers who work with boys with Duchenne muscular dystophy have been waiting for for decades. It's the first true opportunity for hope that this population has experienced in a very long time," said Dr Kathy Mosher.

The drug, called Exondys 51, gives patients like Hubbard, with a specific genetic form of the disease, the hope of maintaining what function they currently have, and possibly gaining back some of what they have lost.

"That in itself would be a miracle and if he gains any additional strength and function that would just be the cherry on top," said Mosher.

The medication has proven extremely successful in clinical trials. It helps replace a protein that helps keep muscle cells intact.

It will have to be administered every week, and the cost is about $300,000 a year, which will be picked up by insurance.

Until now, the typical therapy has been the use of steroids and Prednisone.

"That's not a cure but it does seem to slow down the degeneration or the worsening of the condition so that it allows young boys to walk a little bit longer, on average about 18 months to two years longer than they would normally," said Dr. Ian Rossman, who says that additional time is healthier for bones, heart and for their lungs.

Doctors say everyone who has been diagnosed with muscular dystrophy should also have a genetic diagnosis so that they can determine if they can also benefit from this new breakthrough drug, or another that may just be around the corner.

Rossman now believes that the research is so promising that patients like Hubbard who are able to take it at a young age will be able to grow up and be well enough to take advantage of the next most-advanced therapy when it comes along.

His parents just want him to have as normal as possible of a life as any other seven-year-old might have.

"I just want him to walk across the graduation stage, see him graduate, make it to that point, go to college, have friends, just live a normal life," said his mother, Tiffany McCune.

"We are going to see kids doing better than we have ever seen them do before and so we are really re-writing the natural history or the natural course that the disease takes, and I'm hopeful with this medicine and some others like it, and some others that are coming down the line that we are going to be able to say to families that have this disease, with this treatment here's the new horizon we expect for you, and I think it's an incredible privilege to have that conversation with them for the first time in history," said Rossman.