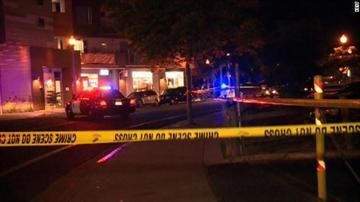 The shootings occurred in Isla Vista near the University of California-Santa Barbara. Seven people also were being treated in a hospital for gunshot wounds or traumatic injuries, including at least one who was in surgery, said sheriff's office spokeswoman Kelly Hoover.

\"The sheriff's office has obtained and is currently analyzing written and video evidence that suggests this was a premeditated mass murder,\" Hoover said.

Hoover apparently was referring to a YouTube video titled \"Retribution\" posted by a young man, CNN affiliate KEYT-TV reported. In the nearly seven-minute video, the young man rants about women who ignored or rejected him over the past eight years and warns that he will \"punish you all for it.\"

The violence began and ended within minutes, from 9:27 p.m. when shots were reported to around 10 minutes later when police discovered the body of the suspected gunman, whom authorities described as mentally disturbed, CNN affiliate KEYT-TV said. Police said there were nine separate crime scenes.

\"Sheriff's deputies responded and found several victims suffering from gunshot wounds. As sheriff's deputies were attending to the victims and performing first aid, they were also receiving suspect information. Only minutes later, there were additional reports of shots fired in several other areas of Isla Vista,\" Hoover said.

U.S. law enforcement officials said the Bureau of Alcohol, Tobacco, Firearms and Explosives and FBI were assisting local police in the investigation, including trying to trace the handgun used and where the possible suspect obtained it.

Robert Johnson told CNN he was standing on a corner when he heard what he thought were fireworks. Then a black BMW with tinted windows drove by and either slowed down or stopped outside a deli where as many as eight people were eating outside. Someone in the car opened fire.

\"I don't recall hearing any screaming,\" he said. \"It was at that point where I turned and ran in the opposite direction. ... There's a lot of confusion. Even shortly after this whole ordeal had ended, I think a lot of people didn't realize the magnitude of the situation.\"

KEYT reporter John Palminteri told CNN that some witnesses reported hearing the gunman talk to some of his victims as he fired. Outside a 7-11 convenience store, he said, workers came out amid the gunfire to pull to safety a girl who had been shot in the leg. Another victim, a bicyclist, apparently sustained massive head injuries after being struck by the gunman's car.

One woman told the station that a driver of a car flashed a gun at her and asked, \"Hey, what's up?\" before opening fire. She escaped unharmed.

\"I heard some pops, but I just assumed they were fireworks,\" said Daniel Slovinsky, who was eating at a restaurant. \"Contrary to what you might expect, there wasn't a whole lot of chaos immediately. I didn't hear any screaming. A few people were running. ... It wasn't really until police started yelling at people to get inside that we realized something big went down. But even then people didn't know what.\"

KEYT reported that \"witnesses described seeing a black BMW speeding through the streets, spraying bullets at people and various targets.\" Six minutes after the first emergency call, the suspected gunman traded fire with sheriff's deputies, and the vehicle plowed into a parked vehicle, said Hoover, the sheriff's office spokeswoman.

\"This is a very active and complex investigation involving approximately nine different crime scenes,\" she said.

Authorities searching for a motive were looking into a video posted on social media that contains a man's tirade against women who supposedly rebuffed him, Brown told the station. Hoover said the suspect has been preliminarily identified but his name won't be released until \"a positive identification is made.\"

The identities of the victims won't be released until the next of kin are notified, she said.