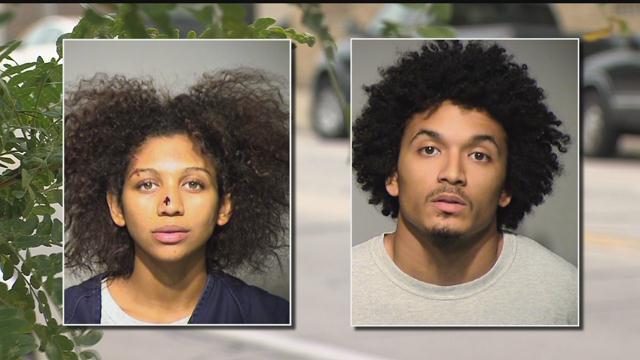 On a Sunday evening, July 17, Sharon Peters was walking from her home to Bastille Days at Cathedral square, with a tight grip on the purse on her shoulder.

"I was totally aware of my environment," she said. "People all around and about, but I didn't see this person come charging down the sidewalk."

That person according to police was 21-year-old Joshua Vega. Peters said he pushed her to the ground and grabbed her purse.

"My lower back was cut up from one side to the other," she said.

Both were later caught after a nearly 30 mile chase that ended in Menomonee Falls, but not before using the victim's credit card at a local gas station and food mart.

Their purchases at target were denied. Vega told investigators they planned to buy a TV then resell it, and use the cash to help with Cole's unborn child.

"There are individuals that have very little moral structure they will do whatever they need to do to victimize people," Peters said.

The 67-year-old is now warning others to be vigilant and encourages festival organizers to have police not only at events, but in nearby neighborhoods too.

"There are a lot of people in the area and they feel that they're vulnerable," she said.

In Milwaukee County court Friday, Vega and Cole waived their preliminary hearings and were bound over for trial. Their next court appearance is August 8.

Peters vows to be at every hearing to make sure justice is served.

"I was totally traumatized by this," said Peters.

Milwaukee Police said there were three strong armed robberies during the four days of Bastille Days, but only this one was close to the festival.

The department told CBS 58 that all city festivals have a planned police presence to ensure people's safety.