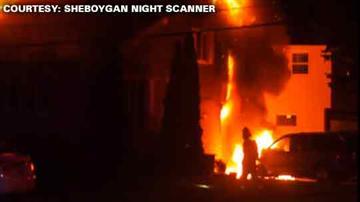 The fire department received a 911 call just before midnight about the home on Ohio Ave being fully involved in fire.

Officials said that you could could see flames from about a half a mile away and smell smoke from a long ways away.

Five teenage girls were home when the fire broke out, but they were able to escape the home on their own safely.

The home, garage and two cars in the drive way were completely engulfed in flames.

The fire department was able to stop the fire from spreading to other homes.

Crews were still out Sunday morning putting out hot spots.