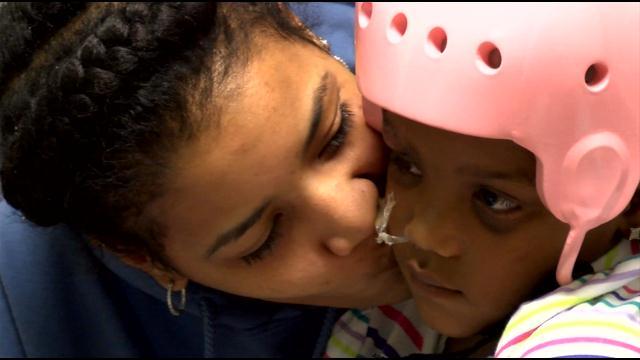 Just being able to hold her little girl is enough for Janikka Marsh, but being able to say \"I love you,\" with their special handshake-- means even more.

\"They said that they didn't think that she was going to make it.,\" said Marsh.

Marsh's 4-year old daughter, Janyela was shot in the head six weeks ago.

\"As we were running down the block, I saw her on the ground and everything was just open,\" recalled Marsh.

The shooting happened on November 5th near Grand Avenue and Villa Street in Racine.

\"I just looked up to the sky and said 'Jesus, you take the wheel, you drive this tour bus, I'll be a passenger, but I can't drive,'\" said Marsh.

Janyela was taken to Wheaton-Franciscan hospital in critical condition-- then flown to Children's Hospital in Wauwatosa.

\"I saw the fight in her, her arms were like going, like she was trying to get up,\" said Marsh.

Janyela suffered skull and eye injuries after the shooting, but she's been making a steady recovery and counting the days until she can go home from the hospital.

\"Her being here, is more than enough for me,\" said Marsh, \"there is nothing that could happen to the person that did this, that's more precious than us still having her life.\"

Janyela will be discharged from the hospital later this week, but will be back for surgery sometime in February.  If you'd like to help with her medical expenses a benefit account is set up in her name, Janyela Marsh-Highshaw, at BMO Harris Bank.  Still no word on who shot her-- if you know anything, call Racine Police.