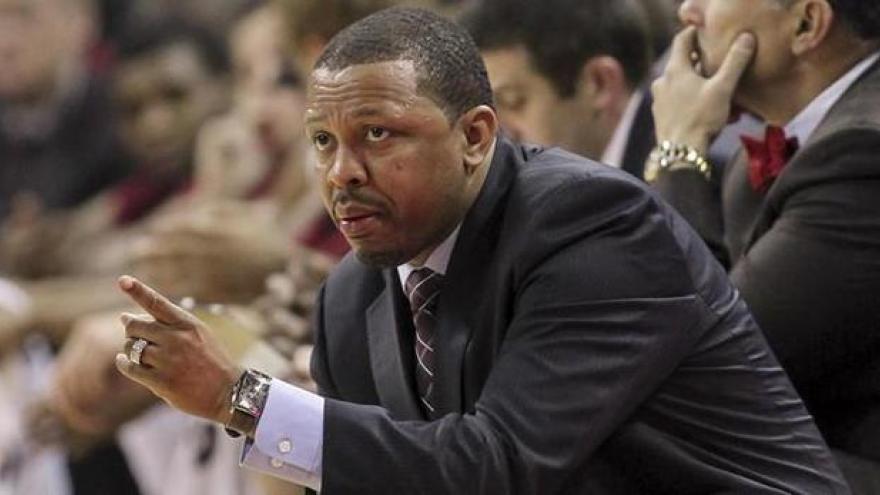 The coaches, Lamont Evans of Oklahoma State, Chuck Person of Auburn University, Emanuel Richardson of the University of Arizona and Tony Bland the University of Southern California, are accused of accepting thousands of dollars in bribes to steer players toward particular financial advisers, and in Person's case, also a suit retailer.

"By allegedly accepting bribes, the four coaches not only breached their obligations to their schools, violated NCAA rules and betrayed the trust of their players," Joon Kim, acting U.S. attorney for the southern district of New York, said at a Tuesday press conference. "They also committed serious federal crimes, as did the managers and advisers who paid them."

Evans, Richardson and Bland are accused of taking tens of thousands of dollars in bribes to advise players to use the services of Munish Sood, chief executive of financial advisory company Princeton Capital, and Christian Dawkins, a business manager, for services after the players turned pro.

"We were shocked to learn this morning through news reports about the FBI investigation and arrests related to NCAA basketball programs, including the arrest of USC assistant coach Tony Bland," the University of Southern California said in a statement released to media Tuesday."USC Athletics maintains the highest standards in athletic compliance across all of our programs and does not tolerate misconduct in any way. We will cooperate fully with the investigation and will assist authorities as needed, and if these allegations are true, will take the needed actions."

The deals were allegedly brokered by Jonathan Brand Augustine, who runs an Adidas-sponsored AAU basketball team, according to a criminal complaint filed in federal court in Manhattan.

"For these men, bribing coaches was a business investment," Kim said.  "They knew the corrupt coaches, in return for bribes, would pressure players to use their own services.…they also knew that if and when those players turned pro, that would mean big bucks for them."

Jim Gatto, the head of global sports marketing at Adidas, and Merl Code, another Adidas employee, are accused of paying high school students money to play basketball at particular schools sponsored by Adidas — identified in charging documents only as a "global athletic apparel company" — and later to obtain the services of Sood and Dawkins. Prosecutors say high school players were paid as much $100,000 as part of this scheme.

"Today, we became aware that federal investigators arrested an Adidas employee. We are learning more about the situation. We're unaware of any misconduct and will fully cooperate with authorities to understand more," the company said in a statement Tuesday.

The complaint against Gatto does not identify the specific schools to which players were allegedly steered, but it does cite a public university in Kentucky with 22,640 students, the exact number of students enrolled in the University of Louisville, according to the school's website, and a school in Florida with 16,000 students, approximately matching the University of Miami, according to the Miami Herald.

A separate complaint filed against Person lays out an apparent bribery scheme to steer basketball players at Auburn University to a particular financial adviser and to an Atlanta-based suit company called Thompson Bespoke Clothiers, operated by suspect and former NBA referee Rashan Michel. Person is alleged to have taken multiple bribes of as much as $50,000 to advise particular players and their families to secretly obtain the services of a financial adviser who was operating as a cooperating witness for federal investigators.

In addition, Person, Auburn's all-time leading scorer and the NBA's 1987 Rookie of the Year, is accused of taking bribes from Michel in exchange for pushing potential NBA players in his program to wear Thompson Bespoke Clothiers suits.

Person was allegedly recorded telling a player he would provide the player with monthly payments, but not to tell anyone. He then allegedly said, "Rashan (Michel) can get you suits and stuff....you'll start looking like an NBA ballplayer."

Michel was allegedly recorded by federal agents telling the cooperating witness he had access to "all the college coaches right now, because, guess what, I'm the one that's with them...I make all their suits."

The FBI and U.S. Attorneys Office says it has been investigating since 2015. It was not immediately clear if the defendants had obtained attorneys in the case.