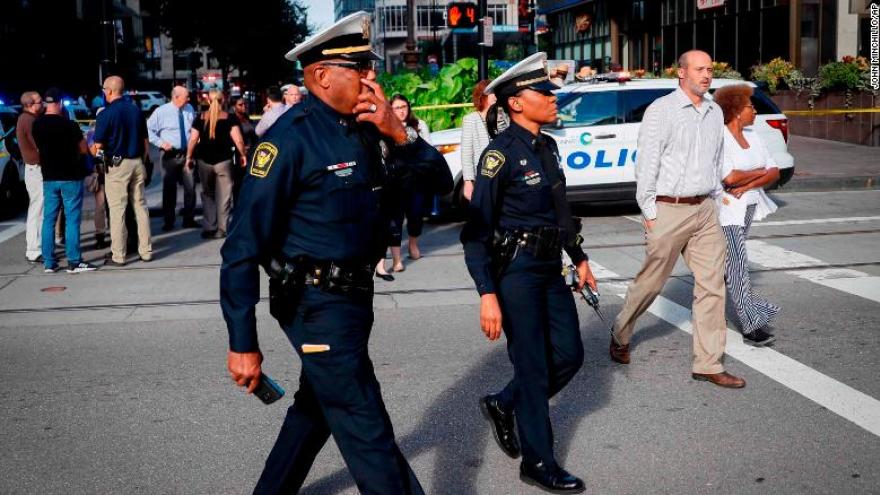 The suspect is also dead, Isaac said. Two others were injured, he said.

The shooting began just after 9 a.m. ET. The gunman entered a loading dock and opened fire before entering the lobby of the building, where three or four police officers engaged him, Isaac said.

The University of Cincinnati Medical Center received victims with gunshot wounds, a woman and three men, said Kelly Martin, senior director of UC Health. Two died, one remains in critical condition and one remains in serious condition, she said.

"I heard about eight gunshots, and I actually got on my knees. I kind of got down on the ground and then all the cops started coming," witness James Walker told CNN affiliate WLWT. "I'm still shaking."

Eric Kearney, president of the Greater Cincinnati and Northern Kentucky African American Chamber of Commerce, was in a board meeting across the street from the bank. He did not hear the shots, he said, but he saw emergency responders wheeling out victims on stretchers.

Gregory Hartsfield told CNN affiliate WXIX that he could hear the shooting unfold from an upper floor of the building.

"We did hear a gun shooting from the 29th floor," he told the station. "We could quickly see there was a large police presence and could see them blocking Fountain Square. We knew immediately something was wrong. We're a bit rattled."

The motive for the shooting is unclear. Streets and sidewalks around Fountain Square were closed.

"People in the immediate vicinity should remain on lockdown until further notice," Cincinnati police said in a tweet.

Police earlier characterized the incident as an "active shooter/officer involved shooting incident" in a tweet, but did not elaborate.

The FBI and the Bureau of Alcohol, Tobacco, Firearms and Explosives have responded to the scene and are assisting Cincinnati police in their investigation, the bureaus said.

Fountain Square is a heavily trafficked landmark in the middle of the city. It is home to retail stores, business offices, hotels and eateries. The Fifth Third Center is a 30-story skyscraper that sits on the square.