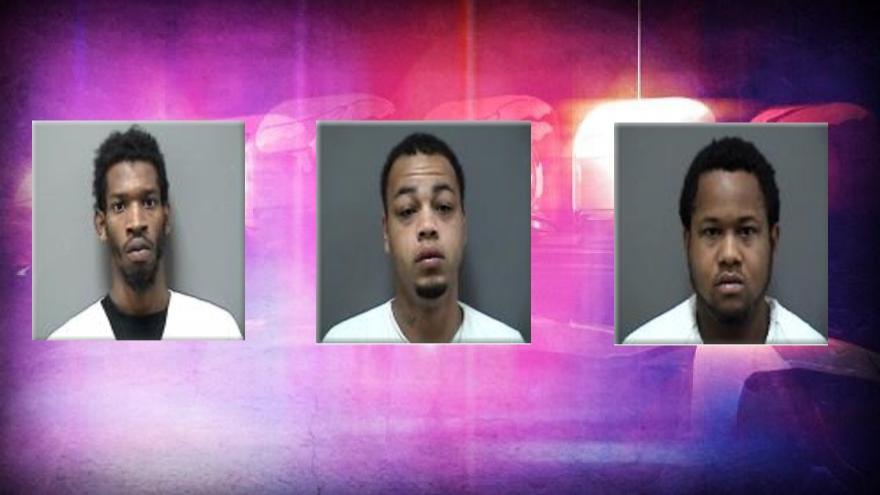 From left to right: Moore, Lewis, and White are all facing charges after an August 17 home invasion in Racine.

RACINE, WIS. (CBS 58) -- Three men are now arrested and facing charges after a home invasion near 11th and Racine Street.

Terrell White, Marquis Lewis, and Sean Moore were all arrested after the August 17th incident.

According to the criminal complaint, the victim called police after four men showed up while she was home alone with her three children. The victim told police that she attempted to flee to the bedroom with her children but the men slammed the door open, entered the residence, and punched her more than 10 times in the head.

After the victim was released from the hospital, she contacted police to report that she found a wallet in her residence containing identification for a Sean Moore. The victim recognized Moore as the primary aggressor in the break in and assault.

According to the criminal complaint, Moore was questioned and admitted to entering the home with three others. (We are not naming the fourth suspect because he has not been charged.) Moore also admitted to striking the victim several times.

He was arrested on a later date. After being placed in handcuffs, Lewis yelled he was not going to jail and began to pull away and fight with officers. Several officers had to decentralize Lewis to the ground.

White told police that Moore, Lewis, and the fourth suspect entered the home while he stayed on the first step. He allegedly heard a woman scream. White also heard that Lewis stole a PlayStation 3 from the home.

The three men now face charges of Burglary, Battery, Criminal Damage to Property, and Criminal Trespass to a Dwelling.