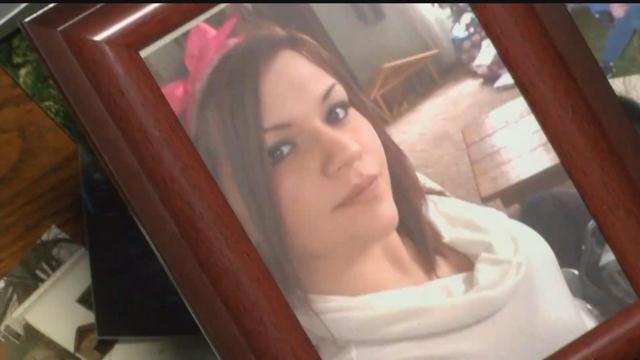 A 25-year-old woman is dead and Brown Deer Police say an impaired driver is to blame. Investigators report that person ran a red light and slammed into a vehicle in the intersection late Saturday night.

Lauren Unertl from the village of Neosho has been identified as the victim, her family said Sunday.

They say she was with her boyfriend when the crash happened. He was in the passenger seat when they were hit in the intersection of West Brown Deer Road and North 60th Street.

He survived with only minor injuries, according to a press release.

But Lauren would be ejected from the vehicle and later pronounced dead at the scene.

On Sunday afternoon Michelle Seering, Lauren's stepmother, shuffled through all the pictures of her stepdaughter growing up.

"She would give me the fist, and she was three-years-old and she would just shake the fist at me," Seering said while laughing.

It's clear that Lauren was always a daddy's girl, Seering said.

"He would have her down in the bike shop and she'd be sitting down in the grease, playing with the nuts and bolts. It didn't matter," Seering said.

"Matter of fact when she was five she had a motorcycle jacket and he would take her on his chopper to school. yeah, not many kids did that," Seering said.

"She was so funny," Lauren's sister Nicole Al Bawi added. "She was just very quick-witted and you loved her sense of humor. She could always make anybody laugh."

But an early morning call changed so much for the family.

Out at the crash scene a car battery is still hooked up to part of the debris. Shattered glass lies across the snowbanks while random pieces of plastic and metal lay near the sidewalk.

The accused impaired driver - who has not yet been named - survived the crash with non-life-threatening injuries.

Lauren's family said they're trying not to focus on that part yet.

"We're pretty understanding. It's difficult for everybody," Seering said.

Instead, Lauren is being remembered along with her relationship with her father who passed away years ago.

"He had multiple myeloma," Seering said.

"I have a strong faith and I know she did too, and people have said this to me already. Her dad died and she could never get over that and nobody can get over it but...she's happy now. She's with her dad. And he welcomed her home," Seering said.

Funeral services for Lauren have not yet been set.

Charges for the accused impaired driver are being referred to the Milwaukee County District Attorney's office on Tuesday, according to a Brown Deer P.D. press release.