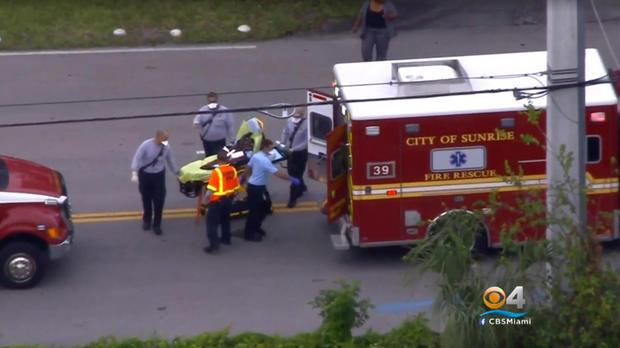 (CBSNews) -- Florida health officials are investigating an incident in which more than two dozen kids got sick at a preschool in Broward County, Florida.

First responders said they got a call around 2 p.m. Monday of a sick child at the Ave Marie Friends Preparatory in Lauderhill. When they arrived, they found 29 students experiencing symptoms of nausea, vomiting, diarrhea, and dehydration, CBS Miami reports.

Rescue crews took 21 children to the hospital. Some children were seen being wheeled out on stretchers. Lauderhill Fire Department Assistant Chief Jeff Levy said eight children were evaluated on scene, but their parents chose to not have them transported to the hospital by Fire Rescue.

Levy says it appears the cause might be food they ate.

“The only common denominator that we can attribute it to is what the children ate for lunch,” he said.

Officials did not disclose what the children ate or where the food came from, except to say that it came from outside the school.

Frantic parents feared the worst when they pulled up to the school and saw a collection of fire rescue trucks and ambulances.

One mother said seeing her son brought her to tears.

“It was just a relief. I started crying,” she said.

The child’s aunt said she is upset that no one from the school called the family to tell them what was going on.

A hazmat crew did not find anything hazardous at the school.