21 Dead After Hotel Attack in Mali 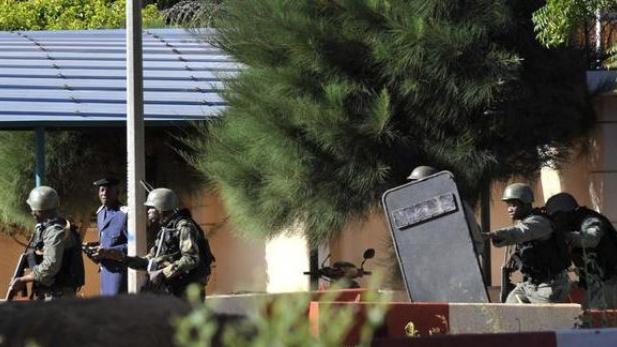 (CNN) Assailants with guns blazing on Friday attacked a hotel hosting diplomats and others in Mali's capital, leaving at least 21 people dead and trapping dozens in the building for hours, officials in the West African nation said.

Malian and U.N. security forces launched a counterattack at the Radisson Blu Hotel in Bamako and escorted guests out. By late afternoon, no hostages were believed to remain in the building, army Col. Mamadou Coulibaly told reporters.

Al Mourabitoun, an Islamist militant group, claimed it was jointly responsible for the attack, according to Mauritanian news agency Al Akhbar. The group announced it carried out the attack with al Qaeda in the Islamic Maghreb (AQIM), the news agency reported.

Al Mourabitoun said the attack was carried out in retaliation for government aggression in northern Mali, Al Akhbar reported. The group also demanded the release of prisoners in France.

Video aired by ORTM showed security personnel leading people out of the building.

The assault began about 7 a.m., when two or three attackers with AK-47 rifles exited at least one vehicle with diplomatic plates and entered the hotel with guns firing, Salgado said.

The attack, Salgado said, came as the hotel hosted diplomatic delegations working on a peace process in the landlocked country, a former French colony that has been battling Islamist extremists with the help of U.N. and French forces.

The Radisson chain said that as many as 170 people -- 140 guests and 30 employees -- had been there as the attack began.

Malian soldiers and U.N. troops had the hotel surrounded, a journalist for ORTM told CNN from the scene. Two security personnel were injured, Security Minister Salif Traore said on ORTM.

No group immediately claimed responsibility for the attack.

The Radisson Blu Hotel is in an upscale neighborhood outside the center of Bamako, rising high above the dusty streets and surrounding houses. With 190 rooms and suites, it is known as a hub for international guests such as diplomats and businesspeople, and it is a 15-minute drive from Bamako-Senou International Airport.

Mongi Hamdi, head of the U.N. mission in Mali, said the diplomats' meetings, which began Thursday, were a possible reason for the attack.

"I think this attack has been perpetrated by negative forces, terrorists, who do not want to see peace in Mali," Hamdi said.

The hotel attack, and the diplomats' meeting, came in a country that has struggled with Islamist extremists, especially since 2012.

Taking advantage of a chaotic situation after a military coup in March 2012, Islamist extremists with links to al Qaeda carved out a large portion of northern Mali for themselves. When the militants tried to push into the south, France, at the Malian government's request, sent thousands of troops in 2013.

The ground and air campaign sent Islamist fighters who had seized the northern region fleeing into the vast desert. The United Nations then established a peacekeeping mission in Mali that year, hoping to keep the government secure enough to continue a peace process.

Though military pressure largely drove Islamist militants from cities, they have regrouped in the desert areas, said J. Peter Pham, director of the Africa Center at the Washington-based Atlantic Council.

"Unfortunately, this (hotel) is a likely target" because it is popular with international guests such as U.N. workers, Pham said.

The attack comes just a day after Hollande praised his troops for successfully fighting Islamists in the former French colony. It also comes a week after France suffered its own high-profile terror attack: Shootings and suicide bombings, claimed by the terror group ISIS, that killed 130 people in and near Paris.

Michael Skapoullis, who lives near the Radisson Blu, told CNN he was using the hotel's gym Friday morning when he noticed fellow exercisers leaving. He hadn't heard anything because he was listening to music, but he decided to follow.

He walked to a door leading to the hotel lobby, and that's when he saw something was wrong.

"When I opened the door, I saw, on the floor, bullets," Skapoullis said. "So I gently closed the door, and ... I went back into the gym" and eventually left the complex.

Another man who'd been in the hotel told ORTM that he heard gunshots that he initially thought were fireworks.

"Then we heard the hotel alarm. ... I walked out into the hallway, and I saw a lot of smoke," said the man, whom ORTM didn't name. "Then I went back into my room to stay there.

"Later, the Malian forces came to get us. ... Thank God we are now healthy and safe."

Diplomats, airline employees were at hotel

As news of the attack spread, media outlets and officials from a number of nations reported that some of their citizens were in the hotel or had been freed. A summary:

• One U.S. citizen died during Friday's terrorist attack at the Radisson Blu Hotel in Bamako, Mali, a senior State Department official told CNN. "We express our deepest condolences to the family and friends of the deceased. ... Out of respect for the family, we have no further information at this time."

• Geoffrey Dieudonne, an administrative counselor for Belgium's Parliament, died as a result of the attack, Parliament said. Details about his death weren't immediately clear; he was in Bamako as part of a three-day French-language convention.

• Seven Algerians, including six members of an Algerian diplomatic delegation, are safe after being trapped in the hotel, the state-run Algerie Presse Service reported. The Algerians were freed during a counterassault by U.N. and Malian forces.

• Twenty Indian nationals, working for a Dubai-based company and staying at the hotel long-term, were safely evacuated, Vikas Swarup, a spokesman for India's Ministry of External Affairs, said on Twitter.

• Twelve Air France crew members who were staying at the hotel were safely extracted, the airline tweeted. Air France has canceled all its flights to and from Bamako as a precaution, the airline said.

• Turkish Airlines said at seven of its employees were staying at the hotel, and all had been freed by the afternoon.

• At least seven Chinese guests were among the hostages, Chinese media reported. At least four of them had been rescued, state-run CCTV reported, citing a source at the Chinese Embassy in Mali.

Friday's attack comes about three months after 12 people, including five Malian soldiers, were killed in a hostage situation and ensuing battle at a hotel in Sevare in central Mali in August.

The soldiers stormed the hotel to end a daylong siege that started when gunmen raided the hotel after attacking a military site nearby, witnesses said.

At the time, the Malian army said the attackers were affiliated with the Macina Liberation Movement. Human Rights Watch has described the group as Islamists who commit "serious abuses in the course of military operations against Mali's security forces."