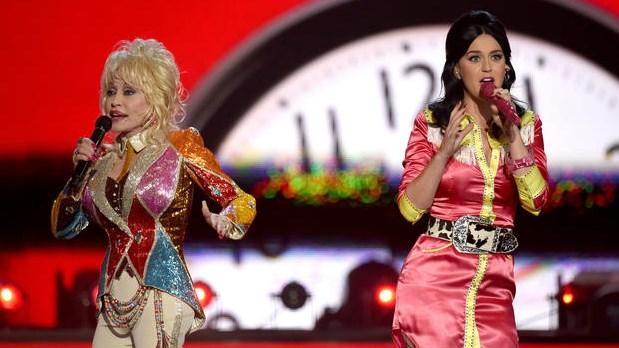 (CBSNEWS) The 51st Academy of Country Music Awards opened with a bang by co-host Luke Bryan, who performed his hit "Huntin', Fishin' and Lovin' Every Day." The song brought the audience -- which included Carrie Underwood, Keith Urban and Nicole Kidman -- to their feet to clap and sing along.

Bryan then introduced his co-host, Dierks Bentley, but Bentley was instead upstaged by Blake Shelton, who launched into a performance of his new song "Came Here to Forget," about two people who start a relationship as they try to forget their exes -- sound familiar?

Finally, Bentley and Bryan came out on stage together, with Bryan cleaned up in a sharp suit after his more casual "Huntin', Fishin' and Lovin' Every Day" outfit.

Then everyone started sparring about who discovered breakout country star Chris Stapleton: Jason Aldean, Thomas Rhett, Charles Kelley of Lady Antebellum and Carrie Underwood all claimed they found him first, with Underwood dropping the mic after she claimed to have discovered the singer before he was even born. Then, when Bentley and Bryan asked the audience if anyone else believed they discovered Stapleton, everybody stood up, leaving the answer a mystery.

Bentley and Bryan then introduced Old Dominion, who played "Snapback," before passing the spotlight on to Kenny Chesney, who sang "Noise."

Jana Kramer and Von Miller presented Song of the Year, which went to Stapleton for "Nobody to Blame." Stapleton has the most ACM nominations, with seven nods. Co-songwriter Ronnie Bowman told a touching story about why he first got into writing music when he was just 14 years old, after his mom asked him to write a song. "I went back there and did that and I have been doing that ever since, thanks to my Mama, who passed away."

Chris Young began the next song, "Think of You," before Cassadee Pope joined him onstage in a dazzling, skintight gold jumpsuit.

After Young's performance, Chris Janson introduced the Walmart Fight Hunger, Spark Change campaign and talked about his own struggle with hunger: "There was a time when I struggled with not knowing what tomorrow may bring," said the "Buy Me a Boat" singer-songwriter.

Eric Church then performed his hit "Record Year" with an interesting twist: In the middle, the singer paid tribute by singing snippets of songs by late musicians Glenn Frey of the Eagles, Scott Weiland of the Stone Temple Pilots, Lemmy of Motorhead and David Bowie, before closing with "Record Year" again.

Dierks Bentley then performed "Somewhere on the Beach" as fans surrounded him while he sang, followed by Cam's performance of "Burning House."

Jake Owen and Betty Cantrell presented Record of the Year, which went to Thomas Rhett for "Die a Happy Man." He thanked his wife, who he said, "This song was written for and about you, baby."

Cole Swindell then took the stage to sing "You Should Be Here" before Brett Eldredge walked down the aisle of the theater to pass out flowers to audience members while he sang "Drunk on Your Love."

Bryan then introduced Keith Urban to the stage, who sang "Wasted Time" and played his banjo amidst flames that surrounded the stage; the flames got increasingly bigger, appearing to engulf Urban and his band.

Little Big Town played a jazzy rendition of "Stay All Night" with New Orleans musician Trombone Shorty, who stopped the show with an impressive solo.

Kelsea Ballerini, who won Female Vocalist of the Year, performed "Love Me Like You Mean It" and "Peter Pan," which featured a guitar solo by Nick Jonas, who soon joined Ballerini with vocals as well.

Little Big Town took the stage to introduce Tim McGraw. Audience members lit up the theater with their phones as McGraw broke into "Humble and Kind."

McGraw sang the song against a backdrop of photos of his fans holding signs with words that were meaningful to them, and he was joined by people in traditional clothing from different countries all over the world.

Darius Rucker and Martina McBride paid tribute to the late Joey Feek and asked the audience to give the singer "one more" big round of applause before they presented Vocal Group of the Year, which went to Little Big Town.

Little Big Town singer Kimberly Schlapman joked, "Thank you Chris Stapleton for not being a group!" as the band accepted the award.

Carrie Underwood wore a cage-like metal dress while she sang her new song "Church Bells" and closed out her intense performance by thrashing a drum set with both arms.

Miranda Lambert then picked up the award for Female Vocalist of the Year, and she praised the other female singer-songwriters in the room: "I'm really excited for women in country music," she said during her acceptance speech.

Sam Hunt sat at a white baby grand piano and played in a matching outfit as he sang "Make You Miss Me." He was followed by Thomas Rhett who sang his hit "Die a Happy Man" -- Rhett had mentioned earlier that the song was about his wife, and the camera panned back and forth between the singer and his wife.

Miranda Lambert, Billy Gibbons and Keith Urban made a powerful trio on stage as they performed ZZ Top's "Tush"; Gibbons showed that time hasn't changed much as he played an epic guitar solo that he passed back and forth with Urban.

Nancy O'Dell presented Male Vocalist of the Year, which was awarded to Chris Stapleton -- the award was Stapleton's fourth of the night.

Kacey Musgraves took the stage to introduce Katy Perry, who presented the Tex Ritter Award to Dolly Parton for the NBC TV movie "Coat of Many Colors."

Perry joked that she had something in common with Parton: "We're both known for some of the biggest," she paused, "songs in country music."

When Parton accepted her award, she joked that she had to wear her multicolored jacket in order to catch up with the "long-legged" female stars in the show, and she gave a shoutout to the actress Alyvia Lind, who played a young Parton in "Coat of Many Colors."

Then Perry and Parton took the stage together in coordinating, blindingly bright outfits. Perry fidgeted with her earpiece and finally threw it into the audience before the two broke out into "Jolene."

Perry and Parton closed out their performance with "Nine to Five," and when they wrapped, Perry got on her knees to bow down to Parton.

Florida Georgia Line sang "Confession" against a spooky backdrop of misty dark woods. The country group was followed by one of the night's biggest winners, Chris Stapleton.

Stapleton sang "Fire Away" with his wife, Morgane, in a stripped down, moving performance.

Tom Hiddleston looked a bit out of place when he took the stage and he knew it.

"As an Englishman and an actor, I feel very much like a guest tonight but my God, you guys know how to have fun, thank you." Hiddleston explained that he felt it was an honor to play Hank Williams in the new film "I Saw the Light."