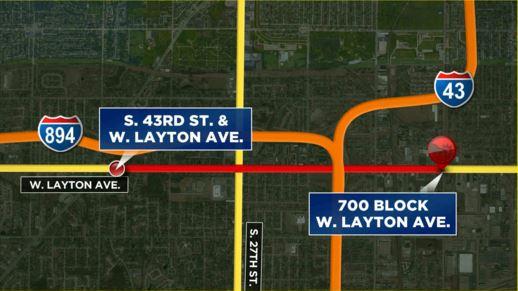 Greenfield Police are investigating a high-speed chase that began around 4:15 a.m. Tuesday, August 18 at 43rd and Layton.  It began when officers observed the speeding car and identified it as a vehicle that had been taken during a carjacking in Oak Creek on Thursday, August 13.

The officer pursued the vehicle, and the short chase ended when the suspects crashed into another car at 7th and Layton.  No one was injured in that accident, and both suspects ran from the scene.  One was apprehended by officers a short distance away, the other was tracked down by a West Allis K-9 unit about 40 minutes later.

While this was happening, a citizen called 911 to report an attempted carjacking at 76th and Layton just before the incident began.  The caller said one of the suspects was armed with a revolver.  Police believe these are the same suspects, as a revolver was recovered in the crashed vehicle.