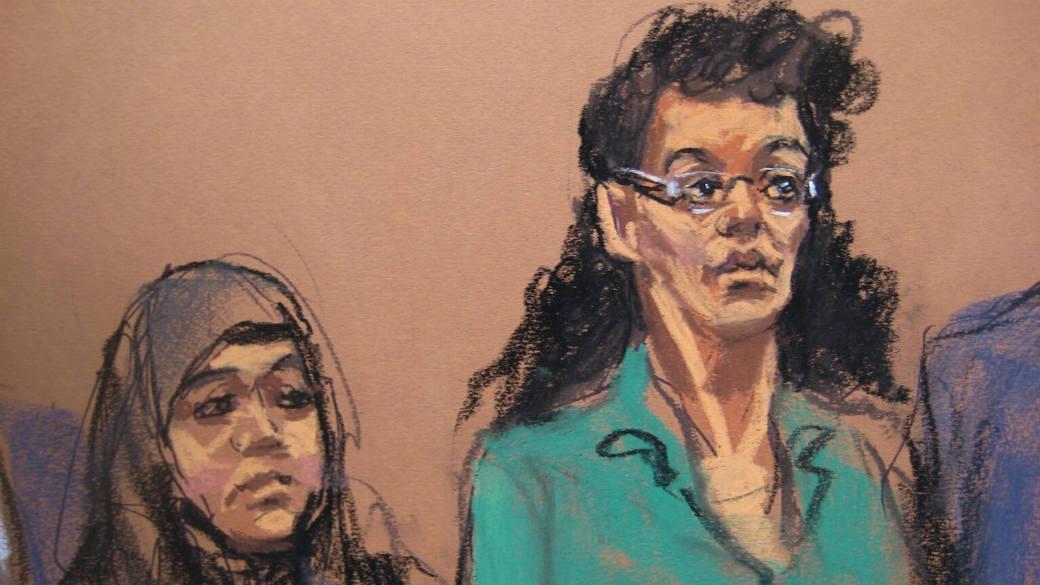 (CNN) -- Noelle Velentzas, 28, could not understand why U.S. citizens like herself were traveling overseas to wage jihad when they could simply \"make history\" at home by unleashing terrorist attacks, according to a federal criminal complaint unsealed Thursday.

Velentzas and her former roommate, 31-year-old Asia Siddiqui, were arrested and accused of planning to build an explosive device for attacks in the United States, federal prosecutors said. Siddiqui is also a U.S. citizen.

The complaint paints a picture of a disturbing trend in homegrown violent extremism.

Siddiqui had repeated contact with members of al Qaeda in the Arabian Peninsula, published jihad-themed poems in magazines affiliated with the terror group and possessed propane gas tanks along with instructions on turning them into explosive devices, the complaint said.

One day, Velentzas pulled a knife from her bra and showed Siddiqui what do with it if attacked, according to the complaint.

\"Why can't we be some real bad bitches?\" asked Velentzas, adding that people needed to refer to the pair as \"citizens of the Islamic State.\"

Velentzas and Siddiqui did not enter pleas when they appeared in federal court in Brooklyn on Thursday. They were held without bond and ordered to appear on May 4.

Thomas Dunn, attorney for Siddiqui, said outside court that his client intends to plead not guilty.

\"She and I will address everything in court,\" he said. \"We're going to fight it out in court.\"

If convicted, the women face a maximum sentence of life in prison.

In the past 18 months, the Justice Department's National Security Division has prosecuted or is prosecuting more than 30 cases of people attempting to travel abroad to join or provide support to terrorist groups. Of those cases, 18 allegedly involve support to ISIS.

In December, Velentzas and an undercover agent discussed the shootings deaths of two New York City police officers who were ambushed in Brooklyn. The shootings demonstrated how easy it is to kill a cop, she said.

\"Killing a police officer is easier than buying food,\" she is quoted as saying in the complaint, \"because sometimes one has to wait in line to buy food.\"

When an undercover agent pointed out that more than 25,000 officers had gathered for the funeral of one of the cops, Officer Rafael Ramos, Velentzas complimented the undercover agent for \"coming up with an attractive potential target\" for a terror attack, the complaint said.

Velentzas and Siddiqui repeatedly expressed support for violent jihad to the undercover agent, the complaint said. They praised successful and unsuccessful terror attempts against Americans.

\"As alleged, the defendants in this case carefully studied how to construct an explosive device to launch an attack on the homeland,\" Loretta Lynch, U.S. attorney for the Eastern District of New York, said in a statement.

\"We remain firm in our resolve to hold accountable anyone who would seek to terrorize the American people, whether by traveling abroad to commit attacks overseas or by plotting here at home.\"

Of poetry and war

In 2009, Siddiqui wrote a poem in a magazine published by al Qaeda in the Arabian Peninsula that urged readers to wage jihad. In it, she declared there is no \"excuse to sit back and wait -- for the skies rain martyrdom.\"

Velentzas described the late al Qaeda founder Osama bin Laden as one of her heroes and kept a photo of bin Laden holding an AK-47 as the background image on her cellphone, the complaint said. She said there were more opportunities of \"pleasing Allah\" by engaging in jihad in the United States.

In February, Velentzas and the undercover agent drove past a Home Depot in Queens.

Velentzas laughed about once having told a Home Depot employee that she was having a barbecue when she was looking for propane.

In a statement, Islamic Circle of North America said Velentzas was formerly homeless and provided shelter by the relief organization.

\"She stayed for a short period of time between 2008 and 2009,\" the statement said. \"While she was staying in our shelter, our staff helped her get on her feet. During this time she successfully completed studies to become a home health care provider after which she became gainfully employed. She left the facility when she married.\"

Velentzas appeared to have experienced hardship in her life but was \"working towards self-development and long-term stability,\" the statement said.

\"She also appeared to be someone who had greatly benefited from the assistance ICNA Relief provides through our shelter system, so we asked her to speak about the experience of our shelter. She appeared at several fundraisers and was the subject of videos as well.\"

Ashley Chung, a neighbor in Queens, said Velentzas had a young daughter and lived with her husband.

\"She's a very friendly woman and I would never even expect that at all,\" Chung said when asked about the allegations. \"They're very lovely people. ... It's so crazy how you live next to someone and you have no idea what they're up to.\"

Thursday's arrests are part of a series of cases being built by the federal government.

Last month, an Army National Guard member and his cousin were arrested in Illinois and accused of conspiring to provide material support to ISIS, federal prosecutors said. The alleged plot included a plan to attack a U.S. military installation in Illinois.

His cousin, Jonas \"Yunus\" Edmonds, 29, was arrested at his home in Aurora, Illinois, in connection with an alleged plot to carry out an armed attack on an unspecified U.S. military facility in northern Illinois where Hasan Edmonds had been training.

The two U.S. citizens were charged in criminal complaints filed in U.S. District Court of the Northern District of Illinois with one count each of conspiring to provide material support and resources to a foreign terrorist organization.

In February, three New York men were arrested and accused of a failed attempt to join ISIS in Syria, prosecutors said.

Abror Habibov, 30, who operated kiosks at malls along the East Coast, was arrested along with Akhror Saidakhmetov, 19, and Abdurasul Juraboev, 24, in connection with an alleged failed attempt by the two younger men to join ISIS in Syria.