2-Foot-Long Cobra on the Loose in Florida Neighborhood 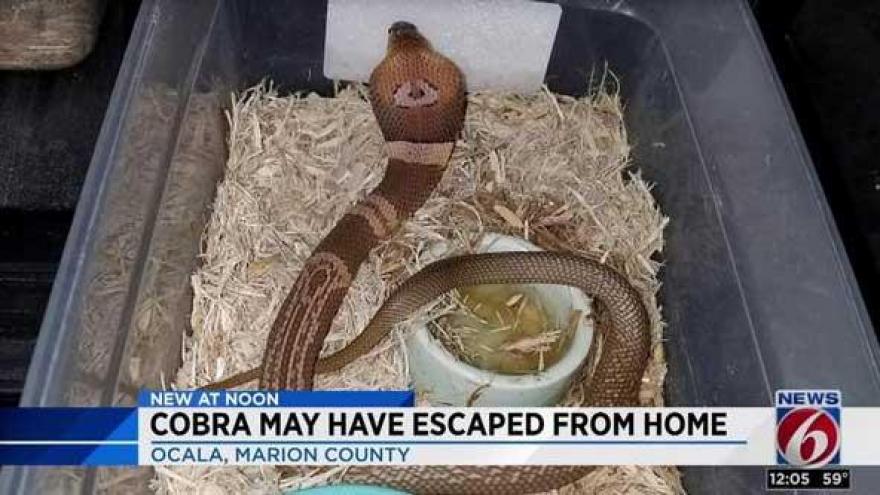 (CBS NEWS) The hunt is on for a missing 2-foot-long cobra that went missing Monday evening from a home in Ocala, Fla., reports CBS affiliate WKMG-TV.

Florida Fish and Wildlife Conservation Commission (FWC) was contacted by the owner Brian Purdy that the reptile escaped its enclosure.

A man was shadowing the snake’s owner so he could get a license to handle poisonous or venomous reptiles and snakes. He was at the home late Monday while the owner was working, reports the Ocala Star-Banner.

Police say he opened the cover of the cage and the snake jumped at him and then slid away. The man called Purdy who rushed home. When they couldn’t find the snake in the concealed room, they called FWC.

Wildlife officials say the apprentice shouldn’t have been left alone in the sealed room.

The Ocala Star-Banner reports that a “large lizard” may have ingested the cobra -- but the results of an X-ray are inconclusive, according to a veterinarian.

The yellow monocled cobra is dangerous which led authorities to warn neighbors.

“Residents in the area are urged to use caution until this snake has been captured,” the FWC said in a news release. “Although reclusive by nature, cobras are highly venomous and will strike out if they feel threatened.”

In typical social media fashion, someone was clever enough to create a Twitter account for the cobra.

The first tweet reads: “Finally freeeeeeee! But isn’t today unseasonably cold for Florida in the middle of March? What gives, science?”

In September 2015, an 8-foot king cobra named Elvis escaped from an Orlando home near an elementary school. It wasn’t until a month later when a woman found it hissing behind her dryer, reports WKMG-TV.