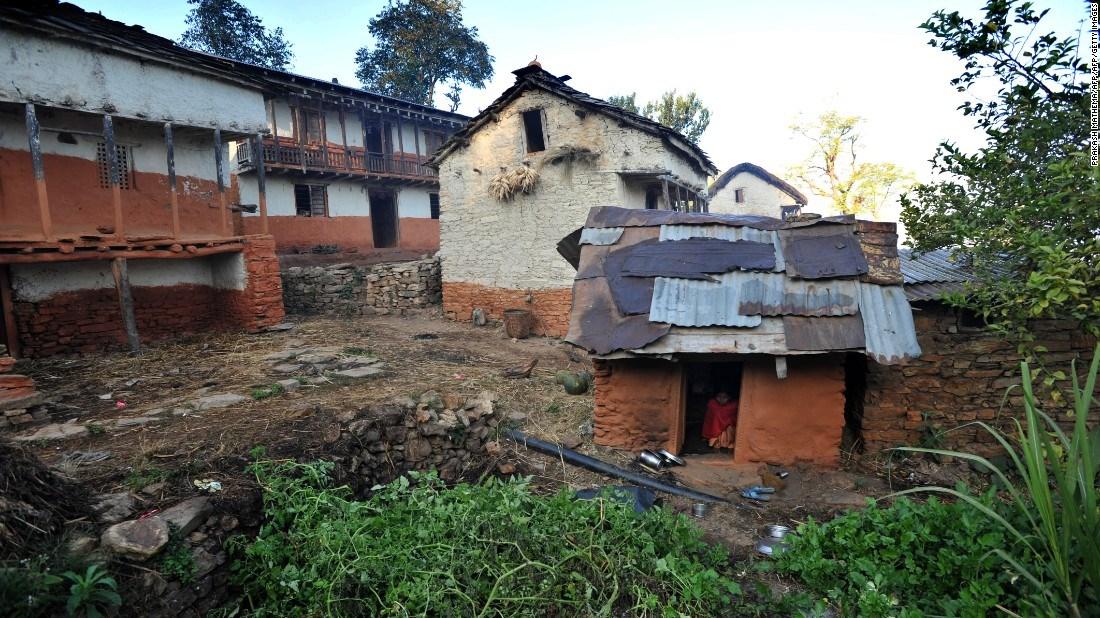 (CNN) Deep in the Himalayas, the night rolled in and a girl in a tiny hut lit a fire to keep warm.

As she slept, the 15-year-old died of smoke inhalation. She was alone, separated from her community because of a biological function that half the world's population will experience.

The girl, from Gajra village in western Nepal's Achham district, was taking part in chhaupadi, a common practice in the far west of the country in which women, considered unclean during menstruation, are banished for the extent of their periods.

Her death was the second in under a month, according to Achham district police inspector Badri Prasad Dhakal, who added that 10 girls have died in similar huts in the district over the past nine years.

"Deaths are usually caused by smoke inhalation, snake bites (and) lack of basic health care during menstruation," he said.

Chhaupadi dates back centuries and has its roots in Hindu taboos over menstruation.

As well as being isolated in tiny "menstruation huts" -- small, ramshackle buildings with small doors and often no windows and poor sanitation and ventilation -- women and girls are forbidden from touching other people, cattle, green vegetables and plants, and fruits, according to a 2011 United Nations report.

They are also not allowed to drink milk or eat milk products and their access to water taps and wells is limited.

"Some in the Far West still believe that a God or Goddess may be angered if the practice is violated, which could result in a shorter life, the death of livestock or destruction of crops," the report said.

"It is believed by some that if a woman touches fruits, they will fall before they are ripe. If she fetches water, the well will dry up."

In some areas, the restrictions extend to girls reading, writing or touching books during menstruation out of fear of angering Saraswati, the goddess of education.

Chhaupadi was outlawed by Nepal's Supreme Court in 2005 and the government promulgated guidelines three years later to eradicate it nationally, but chhaupadi persists, particularly in the country's far west.

Overall statistics are unavailable, but the practice is most common in Achham, Doti and Bajura districts.

Gajra village was declared a "chhaupadi-free zone" in 2015, but Achham women's development officer Bhagwati Aryal said that more than 70% of the 138,000 women in the district still perform the practice.

"Our law has banned this practice, but there is no provision in the law which states punishment for those involved," she said. "Until and unless we have a stricter law with punishment for the culprits, changes will come very slow."

Around 1,500 people live in Gajra, according to government statistics. Birendra Niraula, spokeswoman for the Ministry of Women, Children and Social Welfare, said the "chhaupadi-free zone" categorization was achieved when 90% of the houses in any village had dropped the practice.

"Local shamans started telling parents that any bad luck that has befallen the village was due to girls and women breaking the chhaupadi tradition," she said. "So parents in some villages started to get their daughters and wives back to following the practice again."

While the 15-year-old's death was "very tragic," Niraula said such incidents were "very rare these days, which is a good sign."

While some success has been made in stamping out chhaupadi, the practice is a symptom of wider gender-discrimination in Nepal.

According to UNESCO, around 45% of women and girls in Nepal are illiterate, almost double the rate for men.

A study by the Office of the Prime Minister and Council of Ministers in 2012 found that almost half of women had experienced gender-based violence in their lifetimes, while 28% had experienced it in the past 12 months.

More than 60% of women who experienced such violence did not share or discuss their experiences with anyone.

"These marriages result from a web of factors including poverty, lack of access to education, child labor, social pressures, and harmful practices," HRW said.

"Cutting across all of these is entrenched gender inequality, and damaging social norms that make girls less valued than boys in Nepali society."