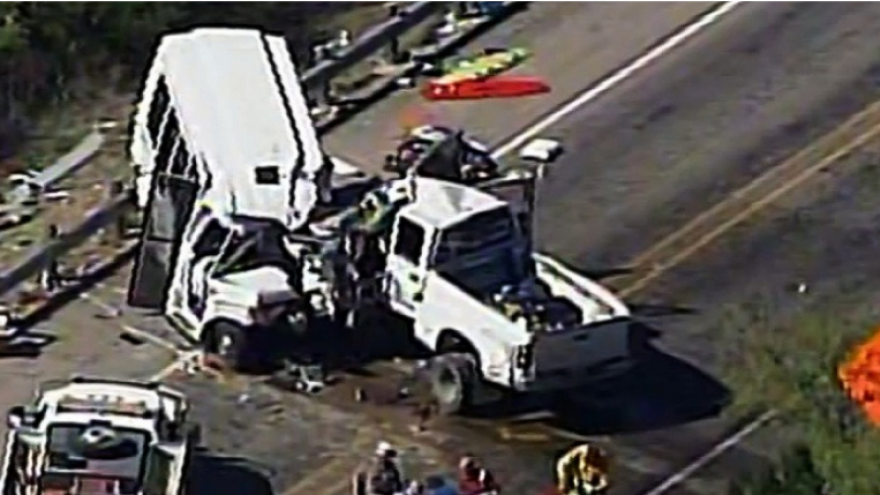 (CNN) Twelve people aboard a minibus bringing senior churchgoers back from a retreat were killed Wednesday in a two-vehicle crash in the Texas Hill Country, officials said.

Three people were injured, including the driver of a pickup that collided with the bus, said Sgt. Conrad Hein with the Texas Department of Public Safety.

"It was a really gruesome scene," motorist Rick Ballesteros of Uvalde, who drove up to the crash site, told CNN affiliate KABB.

The bus was bringing back congregants of the First Baptist Church in New Braunfels from a retreat, the church said on its Facebook page. The post said there were fatalities, but at that point the church was still waiting on details from authorities.

Church volunteer Lisa Crider said the church doesn't know exactly how many people were on the bus.

"We are here waiting to find out any news," she said.

"We are ministering to family members to help them deal with this tragedy. Counselors will be on hand at the church tomorrow," the church wrote. "If you're a Christian, you can pray for those who lost their loved ones and for the church family."

Video from above the crash showed a large white pickup that collided with the front left side of the bus.

The driver of the pickup lived, Hein said. The cause of the accident is still under investigation.

"We are saddened by the loss of life and our hearts go out to all those affected," Abbott said.

The bus was traveling from Alto Frio Baptist Encampment in Leakey when the accident occurred near Garner State Park, about 7 miles away, on a two-lane section of Highway 83.