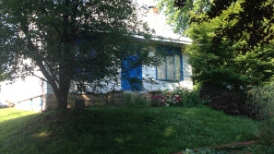 FEASTERVILLE, Pa (CBS) — Lower Southampton Police have toldEyewitness News that they have arrested Lee Kaplan, 51, after officials say that Kaplan fathered two children with an 18-year-old woman living in his home.

Officials say that at least 11 other females, ranging from 6-months-old to 18-years-old, were found in the home between Thursday night and Friday morning.

Kaplan was taken into custody on the 400 block of Old Street Road in Feasterville after police received an anonymous complaint about child abuse in the house.

One of the children that Kaplan allegedly fathered is 3-years-old and the other is an infant, according to police. Authorities say that the 18-year-old found in the home may have been presented to Kaplan years ago as some sort of payment. They add that she was allegedly sexually assaulted by Kaplan for several years.

It is unknown if any of the other children were subject to any abuse, officials say.

Neighbors told Eyewitness News that they complained about the home three years ago, after suspicions about things not seeming to be right.

Authorities tell Eyewitness News that they have no birth certificates for any of the females and cannot find any information about them.

Authorities add that the children found in the home appear to Amish and none are enrolled in area schools.

Police are calling this one of the most bizarre cases that they’ve investigated in recent memory.

“We believe that they’re originally from Lancaster County in the Amish community,” said Lower Southampton Township Police Lt. Ted Krimmel. “Right now we’re working on getting an expert on Amish culture to help us conduct interviews on the rest of these children.

Kaplan has been charged with sexual assault among other related charges. Police have also charged Daniel and Savilla Stoltzfus, the teenage mother’s parents. Daniel is charged with criminal conspiracy, statutory sexual assault and endangering the welfare of a child. Savilla also faces charges of endangering the welfare of a child.

Police are saying that they believe that this was some sort of business agreement between Daniel and Savilla Stoltzfus and Kaplan. Police say Kaplan allegedly admitted that he acquired one of the girls from her Amish parents, and fathered two children with her.

“I really can’t believe it, because I really thought it was his own daughter. It looks like his own daughter to me,” one neighbor said. Neighbors say the girls were rarely let outside, and didn’t go to school.