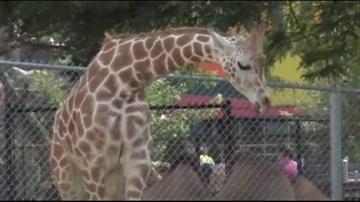 MADISON -- A California woman is facing more than a $600 fine after being kicked by a giraffe at the Henry Vilas Zoo in Madison Saturday.

Now the zoo is reviewing its policies to see how something like this could be prevented.

It happened at the zoo’s giraffe exhibit.

Police say 24-year-old Amanda Hall from California jumped the first rail, and walked up to the second wood rail. She fed the giraffe, and then tried getting inside the pen.

That's when the two year old giraffe named Wally kicked the woman in her face.

She was not severely hurt, only needing a few stitches, but a zoo official says it could've been so much worse because giraffes can kill lions in the wild.

The zoo sometimes allows people to feed the giraffes under supervision, and have never had a problem.

A zoo official says the woman last Saturday did not have permission to go up and feed the giraffe, plus she took it a step further.

\"What might have changed the game for him is when she kind of tried to enter the yard with him. Which is like I said something we don't do... so that's a very different situation one that he's not used to, not accustomed to. So that probably frightened him.\" said Jeff Halter, the zoo’s deputy director.

He says while these animals are viewed as sort of gentle giants of the zoo, they still are wild animals and go into to a fight or flight mode when encountered with a different type of situation.

Halter says normally giraffe would run away, but Wally decided to fight.