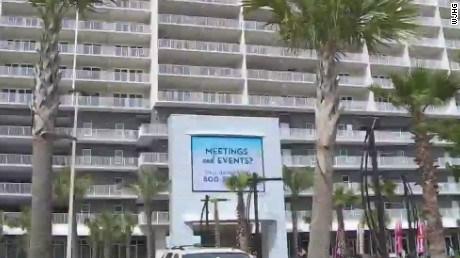 \"They actually spit on me and my service dog as well, and that's just so disrespectful and it hurts. I come and I feel honored and I feel safe and that I belong, but now I feel like I'm defending myself,\" wounded veteran Nicholas Connole told CNN affiliate WJHG.

\"People were urinating off the balconies, throwing up in the elevators, making suggestive and sexual comments about veterans with their service dogs and derogatory and suggestive comments about their wives,\" said Linda Cope, organizer of the Warrior Beach Retreat.

Both the University of Florida and the international office of Zeta Beta Tau are investigating, have apologized to the veterans group and the international office suspended activities for the fraternity chapters at the Florida school at at Emory in Atlanta. The fraternity's executive director, Laurence Bolotin said in a statement that three fraternity members from the University of Florida have been expelled from the group.

\"While the details of their actions are still under investigation, there is no doubt that some of our members engaged in ugly and unacceptable behavior,\" Bolotin said. \"On behalf of our entire organization, I want to apologize to veterans, both those who were in Panama City Beach, and those who have felt the pain from afar, as well as to their families and all who support the Warrior Beach Retreat and had worked to make it a positive and meaningful occasion for attendees.\"

\"I am personally offended and disappointed by the behavior that has been described to me,\" University of Florida Student Affairs Vice President Dave Kratzer said. \"This is not representative of our students or of the university.\"

A reporter for CNN affiliate WFOX went to the University of Florida fraternity house on Friday seeking comment from members. Nobody answered her knock on the door or would talk when she approached them in the parking lot.

Emory University issued a statement saying it was appalled to hear of the disrespectful acts but said \"no evidence has been found to implicate Emory students in these reported incidents.\"

Cope said the Wounded Warriors stayed at the same resort where the fraternities were having their spring formal. She said the fraternity members had too much to drink the night of April 17.

\"We had an American flag flying outside and there was urination coming down from the balconies going onto the flag,\" she said. \"One of the drunk kids pulled a veteran American flag out of the ground and [we] made the boy put it back. This all happened Friday afternoon, through the night, into the late morning.\"

She said the veterans and their families did not retaliate.

\"These men and women acted like the leaders they are of our country,\" she said.

Cope told WJHG she received an apology letter from the University of Florida president and the president of Zeta Beta Tau at that school.

The website for Zeta Beta Tau says it's the the world's first Jewish fraternity and prides itself on being an inclusive organization. In 1989, it became the first fraternity to abolish pledging from its organization, the website said.