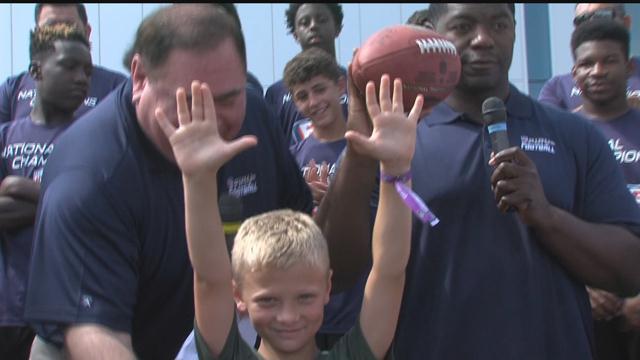 We are counting down to the induction of Brett Favre in the Professional Football Hall of Fame.

CBS 58 attended one of the tradition-rich events of enshrinement weekend. It’s the gold jacket dinner, where we'll get to see Brett Favre and the rest of the class of 2016 put on the famous gold jackets.

There is something special here for people of all ages, including more than 2,500 children who passed a football all the way from downtown Canton to the steps of the hall of fame.

For more than two miles, young fans flipped a football down the street, with some help from a few Hall of Famers.

At the finish line was one of Wisconsin's own, 8 year old Brett Rybarczyk, named for Brett Favre.

He delivered the ball to the steps of the hall of fame and the arms of James Lofton.

"I can't believe I got to do that. I think he's very cool. Every time he gets sacked, he gets right back up,” said Brett Ryzbarczyk.

“I'm excited for the enshrinment of Brett Favre, but to see my son bring off the first ball and hit it off to the hall of fame, and stand next to James Lofton, it's an unbelievable experience. Something I’ll remember forever,” said Matt.

Favre is the biggest name of an impressive group of hall of famers.