You can Now Ride your Luggage Around the Airport 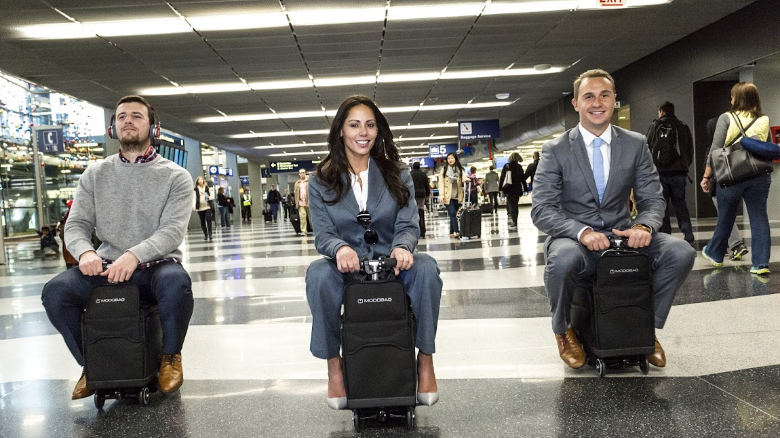 (CNN MONEY) Getting around an airport may never be the same.

A Chicago businessman is selling a rideable carry-on bag. Rather than pulling your luggage from terminal to terminal, travelers can sit on the Modobag and reach speeds up to 8 mph thanks to an electric motor.

"We're not trying to make anyone lazy," said Kevin O'Donnell, the founder of Modobag. "It's about life efficiency."

He's selling the bag for about $1,000 during an Indiegogo campaign. It's small enough to be carried on almost any airline.

But O'Donnell envisions customers using the bag for more than just airport travel. He recommends office workers ride it to the train or around large conferences. O'Donnell regularly takes his Modobag in Chicago bike lanes to run errands.

The Modobag has a range of about eight miles. Its battery power is intentionally set just under the FAA's 100 watt hour limit so that travelers can take the bag on planes. The company says the bag can charge up to 80% in 15 minutes.

Modobag includes a memory foam seat that's strong enough to support a person up to 260 pounds. Riders control the suitcase with a throttle and handbrake.

O'Donnell started working on the project full time two years ago after the idea came to him while lugging a suitcase through an airport.

Modobag appears to have found interest so far. Its Indiegogo campaign reached its funding goal of $50,000 in two days and still has a month left. Modobag will start shipping bags to customers in January 2017.